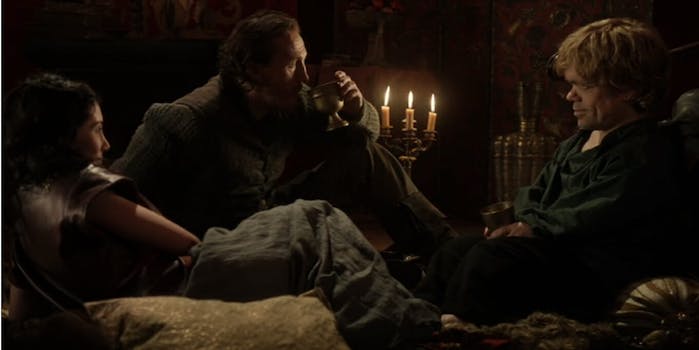 Mondays are going to be rough for the next six weeks.

The final season of Game of Thrones is here at long last. We’ve spent more than a year eagerly awaiting the six-episode finale, and we are going to need plenty of booze to get through what is sure to be an incredibly action-packed and bloody season. Luckily, internet houses dozens of great drinking games to help us chug our way through every character death and awkward, incestuous sex scene. Here are some of the best Game of Thrones drinking games.

Before the iconic opening credits begin, make sure you have a drink—or five—in hand, and select one of these great drinking games to help you through the Long Night.

Of the many things that the people over at BuzzFeed do well, drinking is near the top of the list (just under those orgasmic food videos). Some of the publication’s collection of excellent Game of Thrones drinking rules are a bit outdated, but most of them will go perfectly with the final episodes of HBO’s award-winning series.

Rules like “Whenever you see a boob on screen you have to sing whatever the next person says,” add an extra layer to the game. For people looking for an excuse to go all Lannister on that glass of wine, check out BuzzFeed’s page.

For a more recent take on great Westerosi drinking game rules, the International Business Times published a list for season 7’s premiere. The rules helpfully break down how many drinks each rule requires, so people who are interested in results will definitely be happy with this booze-intensive version.

The Times’ rules require players to take between a sip and a shot depending on what’s happening on screen. There’s no shouting, competition, or ill-advised singing in this version, but what it lacks in drama, it makes up for with the brutal hangover you will doubtless suffer after playing. Take a shot whenever “a minor character dies”? In the last season of this bloody show, a drinking game this intense will require you to call into work on Monday.

If only for their flawless intro, TV Tropes gets a spot on this list. “When you play the Drinking Game of Thrones, you win, or your liver dies. There is no middle ground.” Glorious.

It’s not just the clever word choice that earns TV Tropes a shoutout. The page is nice enough to block out any potential spoilers so that a casual perusal won’t ruin any big moments for newcomers. This version includes extra rules to enhance the fun, like assigning players a religion. Each time their assigned religion is mentioned, players have to drink. Added to these rules are traditional “every time __ does __, take a sip,” which rounds the game out nicely. A small warning, however: The formatting on this site leaves a bit to be desired.

For a simple, streamlined, and mostly up-to-date Game of Thrones drinking game, Games Radar has you covered. The site published a drinking game for season 7, so if you ignore the rules revolving around the Freys and Littlefinger, you should be good.

There are no extra game rules, so this set is perfect for anyone looking for a more relaxed Game of Thrones viewing. Plus, it excludes any shots and most “pound your drink” rules, so if you have to work early on Mondays, this version might be a wise choice.

Another nearly current take on Game of Thrones boozy shenanigans lives at NME.com. This take on season 7 rules has a few references to deceased characters—take that Baelish, you little weasel—but overall, they hold up.

This list lets viewers know how many fingers of booze—which approximate to ounces—each rule requires you to consume. Lyanna Mormont’s iconic sass only adds up to a single finger, but a mere curl of Cercei’s lip amounts to a full three. If you are drinking hard liquor, you might not make it to the end of the episode. Especially since we know the shortest season 8 episode clocks in at just under an hour.

We simply couldn’t help ourselves. If none of those other drinking games do it for you, consider trying out the Daily Dot’s specially curated Game of Thrones drinking game. Warning: We believe in giving your liver plenty of exercise, so proceed with caution.