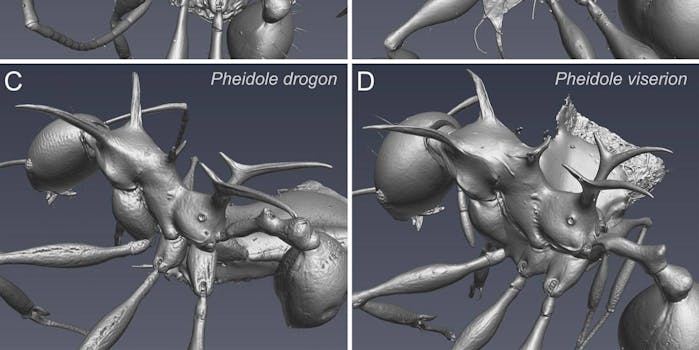 Photo via Sarnat, EM/PLOS One

Cower before Drogon and Viserion!

Scientists have dubbed two new species of absolutely badass looking ants Drogon and Viserion, after two of Daenerys’s dragons in Game of Thrones. They reported their new findings in PLOS One.

The ant species, who are part of the Pheidole genus, have large heads and spikes along their backs that the researchers thought resembled those of Dany’s dragons, according to Popular Science.

The coolest thing is that the researchers used a portable CT scanner to image the ants.

“If you are working in the bush in Africa and find an ant that you want to identify, it is really difficult to fly all the way to a museum in Europe or the U.S. to see collections of already known species,” Georg Fischer, a co-author on the paper told Popular Science. “This way you can download the virtual ant, make measurements, and compare it to the specimen you are trying to identify.”

Researchers think the spikes might be a way that ants can house the musculature required to lift their unusually large heads. Alternative theory: They are meant to act as handles for a tiny Daenerys to hang onto as she uses them to conquer her enemies.