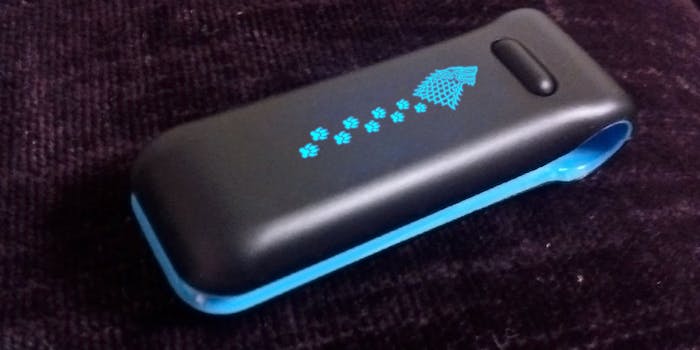 They must have all of the Fitbit badges by now.

The Starks have come a long way since their humble beginnings as a happy, albeit terrible, family in Winterfell. Literally.

Out of all the major families of Westeros in Game of Thrones and A Song of Ice and Fire, the Starks have easily covered the most ground. Ned traveled to the Tower of Joy in Dorne to rescue his sister Lyanna after Robert’s Rebellion, Catelyn lived in Riverrun before marrying Ned, and Jon’s origins are still a very popular mystery. And that’s all before Game of Thrones begins.

Over the course of five seasons and five books, the Starks have ended up in King’s Landing, at and beyond the Wall, Riverrun, the Eyrie, across the Narrow Sea to Braavos—and just about everywhere in-between. They’ve seen a lot of shit along the way, and some of them have even lost their heads. But what kind of mileage are we talking about?

If it were up to George R.R. Martin, that’s a question he’s tried not to answer. The accuracy of how long it would take the Starks to get to King’s Landing or for Petyr Baelish (AKA Littlefinger) to scheme with the different ruling families isn’t something that’s particularly doted on; for example, the Baratheons, Lannisters, and Starks were in King’s Landing by the third episode.

Plus, this is the realm where winter and summer can last years—up to a whole generation. When time is so disoriented, it’s near impossible to figure out how long everything takes. Days? Weeks? The true answer may be “as much as is needed.” Besides, if fans had that kind of information, they might go and tell Martin that his narrative is inaccurate.

It’s also why the maps of Westeros and Essos—which are part of the books, seen in the show, and sold online—are so vague with scaling and distance.

I have deliberately tried to be vague about such things, so I don’t have obsessive fans with rulers measuring distances on the map and telling me Ned couldn’t get from X to Y in the time I say he did.
However, if you really must know, you can figure out the distances for yourself. The Wall is a hundred leagues long. A league is three miles. Go from there.
But if you turn up any mistakes in travel times by using that measure, let it be your secret.

He did leave fans with one clue: the Wall, which marks the border between the Seven Kingdoms of Westeros and the wilderness beyond the Wall, measures 100 leagues, or 300 miles, across. So we ran with it.

Like Martin, we’re not as concerned with the time it took to get the Starks—clearly the fan favorites aside from Tyrion Lannister or Daenerys Targaryen, whose journey was mapped out by Tech Insider last year—from each place. Time’s a funny thing in Westeros, even when you’re not time-traveling by weirwood tree. With help from Martin’s books and using Quartermaester’s fanmade map as a rough guide, we figured out how far each Stark has traveled, and it’s more than enough miles to make our feet hurt.

It’s as if the Starks all strapped on a FitBit (which tracks steps and miles, among other things), while the rest of us hum “I’m Gonna Be (500 Miles)” from the comfort of our homes.

Click here for a larger version of this chart.

The data is based strictly on book journeys and charted by chapter, so events like Sansa’s journey from the Eyrie to Winterfell in order to take up Jeyne Poole’s book plot and Jon’s rescue mission at Hardhome aren’t included. Rickon, who essentially follows Bran’s trajectory until he, Osha, and Shaggydog split off for three books—to Skagos, perhaps?—is also excluded. And as far as that book reveal fans are still waiting for? We left that off too since that character’s almost like a completely different person from the one we knew.

Their travels may easily eclipse ours, but as we look back at how far everyone’s come, we’re pretty sure we wouldn’t want to actually walk in their shoes, even if they do surpass their daily step goals.

Poor Ned. We do say that a lot, considering how his final moments went, but he never did get to explore Westeros beyond the northern borders unless he was fighting a war or ending a rebellion. That could’ve been because he was Lord of Winterfell and Warden of the North, or maybe he just didn’t like leaving home all that much, which, is fair enough.

His journey is short and none-too-sweet. He went from Winterfell to King’s Landing early in A Game of Thrones, spanning approximately 1,750 miles (roughly the distance from New York City to Denver), and King’s Landing is where he died.

Although Catelyn may have been among the next Starks to get killed in a particularly brutal manner by another scorned family, she’s the most-traveled of them all by a longshot.

And she’s got a lot of ground to cover. She travels to King’s Landing by ship (after catching one in White Harbour), starts to head home before catching Tyrion, who she believes tried to murder Bran, at the Inn at the Crossroads. She takes him to the Eyrie, and then joins up with Robb after learning of Ned’s arrest. From Riverrun to Bitterbridge, and all across central Westeros, she tries to negotiate and play her part in a fruitless war with more than 8,400 miles under her belt. And even after her death, she still travels to claim revenge throughout the Riverlands.

Robb is the only Stark included in this list who isn’t a point-of-view character in the books, so his journey is mostly seen through the eyes of Catelyn. Although, for the most part, his trek is a straight journey south.

He meets up with Catelyn at Moat Cailin, agrees to the Freys’ marriage agreement, and spends most of his remaining days warring across the Riverlands and Westerlands, traveling around 2,900 miles in the process. He may have won every battle, but his fate was sealed the moment he broke his vows to Walder Frey and married Jeyne Westerling (Talisa Maegyr in the show).

Jon left Winterfell early on and never looked back.

This is true of the other Starks—none of have yet returned home after leaving it in the books, although Sansa does in the show—but in Jon’s case, his story takes him far north to the Wall, but he doesn’t exactly stay there.

As Jeor Mormont’s steward, Jon embarks north on the Great Ranging to find Benjen Stark, a mission that goes disastrously awry. He’s captured by the wildlings, forced to kill Qhorin Halfhand to maintain his cover, has to climb up the length of the Wall (all 700 feet of it), and ends up in Queenscrown before heading back home. The approximately 2,300 miles he travels is all before the Battle of Castle Black, and he more or less stays in Castle Black from when he becomes Lord Commander all the way to his death. (As far as we know, Jon is not involved in going to Hardhome in the books.)

Sansa might not return to Winterfell in the books, but she does end up becoming a bit of a traveler later on.

For the majority of her story to date, she’s stuck in King’s Landing as a hostage and political pawn of the Lannisters. But after the Purple Wedding she’s able to sail out of the city with Littlefinger and ventures to the Eyrie, traveling around 3,200 miles. That’s where we last see her as Littlefinger hones in his scheming and teaches Sansa a thing or two while he prepares to lift her up as Queen of the North.

Arya may be trying to be No One, but for much of her wandering around Westeros, she’s also going Nowhere.

It’s not her fault, after all. In the beginning, she’s taken to King’s Landing with Ned before she’s smuggled out of King’s Landing by Yoren, a brother of the Night’s Watch. Once that plan goes awry she’s a prisoner at Harrenhal, under the watchful eye of the Brotherhood Without Banners, and a hostage of the Hound. And pretty much every family member that the Hound tries to ransom Arya off to ends up dead. It’s only after she leaves the Hound for dead that she’s finally able to travel somewhere on her own. By the time she arrives in Braavos, she’s gone more than 5,300 miles.

Bran goes farther north of any of the Starks (Jon included) with his direwolf Summer, Hodor, and the Reed siblings Meera and Jojen, which takes him nearly 1,500 miles. He spends most of the first two books at home in Winterfell, acting as its Lord once Robb declares himself King of the North. He, Rickon, their direwolves, the Reeds, Hodor, and Osha escape after Theon Greyjoy takes Winterfell, and it’s around here that Bran and Rickon split off from each other.

Then, it’s a semi-straight journey north to find the Three-Eyed Crow (known as the Three-Eyed Raven in the show) with help from Samwell Tarly and Coldhands, a dead wight-like being that helps him in his journey north. Now that he’s met the Three-Eyed Crow and has started to train with him, Bran doesn’t look like he’s going anywhere anytime soon. But considering his promise that Bran will fly, he may end up going further beyond what any of the other Starks will achieve.