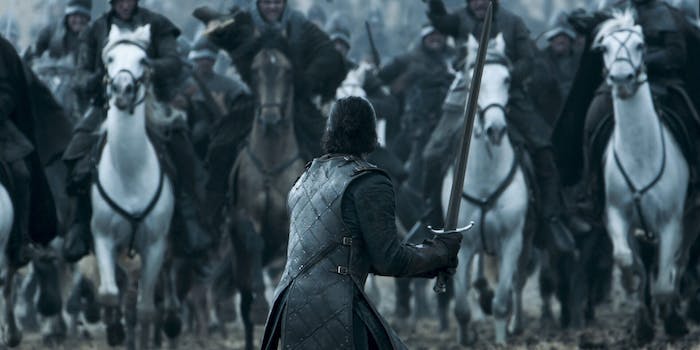 ‘Game of Thrones’ confirms its director list for season 8

They're behind some of the show's most iconic episodes.

Game of Thrones doesn’t go into production until next month, but when it does, we now know who will sit in the director’s chair to bring the epic story to a close.

Entertainment Weekly revealed in a new report that Miguel Sapochnik and David Nutter, who both won Emmys for their work on Game of Thrones, will return to direct season 8, while showrunners David Benioff and D.B. Weiss will collaborate on one of the series’ most anticipated episodes.

Nutter has previously directed six episodes of Game of Thrones, including the infamous Red Wedding in “The Rains of Castamere,” and the final two episodes of season 5, “The Dance of Dragons” and “Mother’s Mercy,” the lattermost episode for which he won a directing Emmy. Sapochnik has four directing credits to his name, many which have become fan favorites. He was behind season 5’s “The Gift” and “Hardhome” and brought to life the final two episodes of season 6, the Emmy award-winning “Battle of the Bastards” and “The Winds of Winter.”

Some fans already figured out that Sapochnik would be involved with season 8 before it was made official thanks to an Instagram post from cinematographer Fabian Wagner (first spotted by Watchers on the Wall).

Back on Game of Thrones for prep of the final season and the team is back together. Good times even though winter is already here #gameofthrones #miguelsapochnik #carolinevalderson #joebauer #stevekullback #vfx #dop #setlife #battleofthebastards #cinematography #behindthescenes #emmyawards

Unlike Benioff and Weiss’ announcement of the season 8 writers at SXSW, it’s unclear just how many episodes Nutter and Sapochnik will direct, although Entertainment Weekly suggests that it’s possible Sapochnik might direct two or three of the six episodes planned for season 8.

What is certain is which episode Benioff and Weiss will take on. They’ll be directing the Game of Thrones series finale, which they also wrote. They previously directed season 3’s “Walk of Punishment” and season 4’s “Two Swords,” but because of Directors Guild of America rules on credit for TV and film, only one of them is able to take credit for directing the series finale. (Benioff is credited for “Walk of Punishment” while Weiss is credited for “Two Swords.”) It’s unclear which showrunner will be credited for the series finale.

While fans have plenty to be excited about for the return of Nutter and Sapochnik for season 8—indicating that Game of Thrones is working with seasoned directors who have gone to Westeros before—it will likely disappoint those who had hoped that Game of Thrones would hire a female director after not having worked with one since season 4; Michelle Laren remains the only woman to have directed an episode of Game of Thrones.