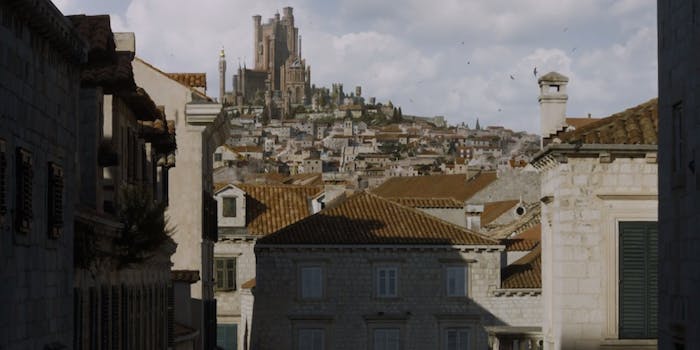 HBO made the decision based on 'story and locations needs.'

Game of Thrones has brought Westeros and Essos to life with productions running simultaneously across multiple countries for years now, but fans won’t be seeing one country that’s been part of the show for years in the upcoming season.

HBO confirmed that it will not be shooting in Croatia for the sixth season of Game of Thrones, which is home to filming location exteriors such as King’s Landing, Meereen, and Braavos. According to Watchers on the Wall, the decision was made “based on story and locations needs.”

The question of whether the production will return to Croatia in the future will be decided once additional seasons are officially set by HBO. At that time, the production, along with HBO, will assess their location needs based on the scripts and storylines. HBO remains grateful to the HAVC and the Croatian crew for all of their continued support.

Croatia has been integral to Game of Thrones ever since the second season, with the city of Dubrovnik in particular standing in for King’s Landing. At a glance, it might seem that we may be getting a reduced storyline from the characters in those cities, such as Tyrion and Cersei Lannister. But that’s probably not the case, and not just because fans wouldn’t allow for either of them to leave without some sort of death scene.

While very little is known about the plotlines that will be covered in season 6, it’s unlikely that two of the show’s biggest characters will simply disappear without another mention (such as Rickon Stark and Osha or Gendry on his boat). Set reports claim that the Spanish town of Girona will be standing in for both King’s Landing and Braavos.

Least of all, we know that the storyline in Braavos will continue based on a recent photo from Maisie Williams, demonstrating what happens after a day of filming in blind contact lenses.

1) There won’t be a huge exterior scene in King’s Landing, Braavos, or Meereen this season

In past seasons, we’ve seen huge outdoor scenes take place in King’s Landing, such as the Purple Wedding, Cersei’s walk of atonement, and Oberyn Martell and the Mountain’s big fight. The King’s Landing storyline in A Song of Ice and Fire ends with Cersei’s walk, so we’re in the dark with what happens next; same with Meereen, which doesn’t even include Tyrion. The Braavos plotline from the books still hasn’t been completely covered, so that could include some more outdoor scenes.

Perhaps, if the scenes aren’t as intensive to film as in the past, Game of Thrones might be able to get away with using a different set located closer to another one being used. (According to Winter Is Coming, Game of Thrones will only be shooting in Girona from Sept. 3-18 for Braavos and King’s Landing.)

2) Most of the major scenes might take place indoors

Game of Thrones is just as much a political game as it is one played with giant armies. Some of the best scenes took place in small council rooms and behind closed doors. They may be devoid of the special effects seen in “Hardhome” and “The Dance of Dragons,” but they remind us of why we fell in love with the show in the first place.

With Cersei in the midst of political turmoil, Tyrion now in charge of playing the game in Meereen, and Arya Stark having to learn how to function while blind, we’re bound to see things indoors a lot more often—which the production teams can easily film inside their studios in Belfast, Northern Ireland.

Game of Thrones is basically in unknown territory, and while it can’t avoid the Jon Snow Lives brigade every time Kit Harington is spotted in Belfast, it can try to nip it in the bud in other cases.

Cersei’s big walk last season was plagued with leaked photos and reports that the film commission in Dubrovnik wouldn’t give producers the permits to film the scene. Another filming location in Spain will be home to the Tower of Joy, which is enough to fuel plenty of speculation from the fans.

By filming those scenes in other locations or inside, they may involve the larger groups of fans who don’t constantly follow set reports to be spoiled by upcoming storylines to be surprised about upcoming seasons. And that’s something we haven’t really had for a while.