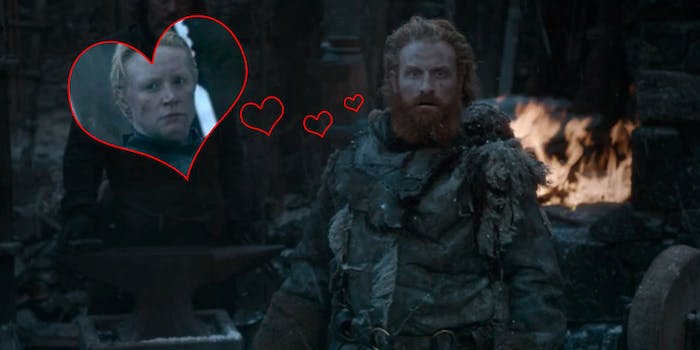 Their romance may not be long for this world, and not because it's 'Game of Thrones.'

Warning: This article contains minor spoilers for Game of Thrones.

Game of Thrones isn’t exactly known for its epic romances, especially when the longest, most stable, canon relationship of the series is one of incest. But an episode filled with uncharacteristically happy moments gives us hope.

Yes, this is the episode that finally reunited two Stark children after so many close calls. But “Book of the Stranger” is also the episode that introduced us to the character pairing we never knew we needed. Tormund Giantsbane has seen what wights and White Walkers can do (and has even fought them alongside “Crows”), but Brienne of Tarth is something else. She’s unlike anything he’s ever seen, but he doesn’t look at her like most men from Westeros do; he’s seen a woman fighter before.

They have yet to say a word to one another, but they don’t need to when their eyes (and eyebrows) can easily do all the talking.

In about a minute of screentime together, people were already hopping aboard TarthBane—a ship (read: romantic paring) that didn’t exist before now because Tormund and Brienne have yet to meet in the books.

I look forward to reading all your Brienne/Tormund fanfic in the morning, guys.

It’s also a ship that’s almost certainly doomed, and not just because it’s Game of Thrones we’re talking about here. The episode description for next week’s episode, “The Door,” suggests that these two new lovebirds are about to be separated, and probably for good.

Tyrion seeks a strange ally. Bran (Isaac Hempstead Wright) learns a great deal. Brienne (Gwendoline Christie) goes on a mission. Arya (Maisie Williams) is given a chance to prove herself.

We knew this would happen, even just based off the trailers. Tormund is very much in the middle of the Battle of the Bastards, whereas Brienne and Podrick Payne end up in the Riverlands. And considering how Game of Thrones goes, nobody stays happy for long.

There isn’t much Brienne/Tormund fanfiction just yet, but here are some places you may be able to start. And remember, they’ll always have Castle Black.

In A Storm of Swords, Tormund tells Jon Snow a hell of a tale about the one time he had sex with a woman who appeared to turn into a bear the next morning. It’s outlandish and absurd, and Ygritte calls him out on it in the show, although some believe the woman in question is Maege Mormont, who claims that the Mormonts are skinchangers.

Meanwhile, Brienne’s encounter with a bear was much less pleasant by all accounts.

But if it is true, how on Earth does one break that to a potential lover—one who was taught from birth that the most important thing she owns is her virtue?

We’ve already seen the Game of Thrones high school twist, but that didn’t take any of the more minor characters into consideration. Brienne has already faced high school-level cruelty because she wants to fight like the men, and her attempts at romance have failed: She wasn’t Renly Baratheon’s type, and he’s dead; Jaime Lannister is like the popular star athlete who befriended her on the down low and got her a really nice going-away present (but didn’t want anyone else to know about it).

Nothing like a stare down says love at first sight.

This won’t happen in the show, but there’s nobody as capable as these two. Jon and Sansa might be playing politics with the North, so it’s up to Brienne and Tormund to take charge in the fight against the Boltons.

Maybe Brienne’s about to get stabbed in the back while trying to fend off someone from killing Podrick, whom she’s become really fond of, or maybe Tormund lost his sword and it’s Oathkeeper that keeps another one from gutting him. They’ve easily got this.

4) Bonding over the potential incompetence of the Stark kids

Brienne might’ve once again pledged her loyalty to House Stark, but it’s not the easiest of charges. Meanwhile, Tormund’s known Jon for some time now, and most of their encounters involved other people getting killed, and we already know he has plenty of witty remarks to say about the size of Jon’s penis.

They’re just soldiers in this hopeless war that they don’t have a personal stake in. And while they may fight until the bitter end, they don’t have to do it without any secret complaints over a hot fire and plenty of furs to keep them warm. And maybe some mutton?

5) What was left unsaid

We must give proper credit to Gwendoline Christie and Kristofer Hivju. Because without their expressions, we wouldn’t be able to overanalyze what might’ve been going through their minds when they first caught eyes—and again as his eyebrows raised in her direction during his meal.

They’re soulmates, I tell you.