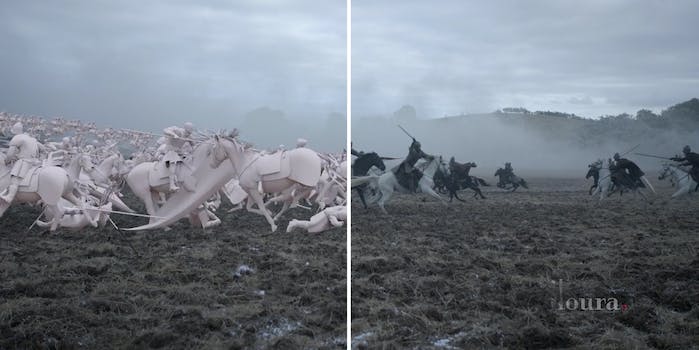 Game of Thrones can effortlessly tackle emotional stakes just as well as it does epic scale, and a new visual effects reel shows just how much went into making the show’s biggest battle to date.

We’ve seen what a little VFX magic can do with “Hardhome” and Daenerys Targaryen’s escape from Meereen on Drogon, but one of the first reels to come out of Game of Thrones’s sixth season from iLoura, an Australian visual effects studio, brought the Battle of the Bastards to life in a visual triumph that made it feel all too real—even with the addition of a giant. Hundreds of extras are made to look like thousands, horses are added so that real ones won’t get hurt, and the dead bodies set the tone.

And Kit Harington was right: that scene where he’s caught in the crossfire of riders from both sides clashing? That was all him.