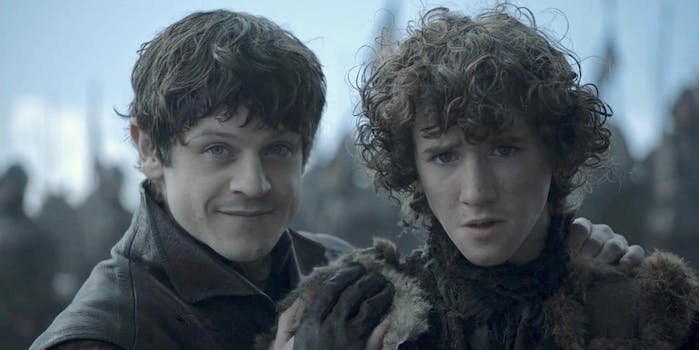 Warning: This article contains spoilers for the most recent episode of Game of Thrones, “Battle of the Bastards.”

The Battle of the Bastards was full of death and carnage, but one departing actor on Game of Thrones may have noticed the same thing many fans did.

Sansa Stark said it herself: Rickon was essentially marked for death before the battle even started. As the last known living, legitimate son of Ned Stark, he had more of a claim to Winterfell than Ramsay Bolton and he was more of a threat than Jon Snow or herself. And when the two armies faced one another, it was clear that she was right. Ramsay played one of his games and cut Rickon loose, ordering him to run to his brother while he shot arrows. And, like most Stark reunions, Jon and Rickon were close to reuniting before an arrow struck Rickon down.

The fact that Rickon died likely didn’t surprise many people. He hasn’t been around for a few seasons and he isn’t as important to any overarching plot as Arya, Sansa, Bran, or Jon (who was so important he was brought back from the dead by Melisandre). In other words, Rickon was completely expendable. And even if fans already knew how this would go, it didn’t stop them from yelling at Rickon to “run serpentine.”

The idea of running serpentine, or essentially running away in a zigzag-like pattern to avoid whatever’s being shot at you (whether it be bullets or arrows), dates back to the 1979 film The In-Laws in film and has been referenced more recently by Will Ferrell and Archer. If Rickon had run serpentine instead of in a straight line back to Jon, it might’ve been harder for Ramsay to strike him with an arrow.

Some of them yelled it at their TVs and live-tweeted at Rickon to run serpentine, but soon the battle plans started to come online.

And Art Parkinson, who’s played Rickon off-and-on for the past six seasons, even referenced it when he sent out his farewell Game of Thrones tweet.

Had a good run #shouldazigzagged

Would he have died if he had run serpentine? Probably. But it may have played even more into Ramsay’s game while giving us a tiny sliver of hope.