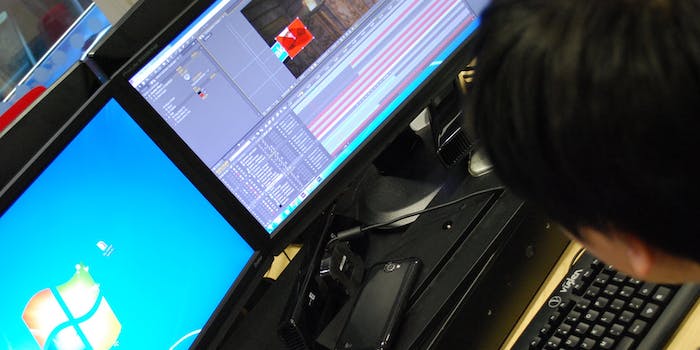 "Do you think you’re at an advantage because you have a pretty lady on your team?"

The PepsiCo-sponsored GAME_JAM started as a four-day, $400,000 event where game developers would collaborate and compete for prizes. It took just one day for the entire thing to go up in flames.

Filmed for YouTube and structured more like reality TV than a typical game jam gathering, the whole thing tanked within the first 24 hours, allegedly thanks to the behavior of PepsiCo media consultant Matti Leshem.

Blog posts from participants have been popping up all over the place, but the lengthiest expose comes from an employee of Polaris, the Maker Studios subsidiary that organized GAME_JAM in the first place. Jared Rosen paints a picture of an event that quickly spun out of control thanks to a combination of heavy-handed influences from sponsors, and Leshem’s abrasive presence on set.

Judging from Rosen’s account on indie gaming site Indiestatik (“How The Most Expensive Game Jam In History Crashed And Burned In A Single Day”), the first warning sign was the way GAME_JAM changed during its production stages. Instead of being a YouTube-oriented version of a traditional game jam where developers bounce ideas off each other in a “hack week” environment, it wound up being a Top Chef-esque game show.

Rosen characterized it as, “A sort of competition, held between four teams of “Jammers” (the developers) and “Gamers” (the YouTubers)… to see who could win a healthy array of branded prizes, generously procured by said sponsors and totally un-vetted by anyone who actually understands game development. At some point which remains unclear, the show wholly dipped into a scripted reality slant and became less about making a game and more about creating drama for sake of the audience.”

The next thing to set off alarm bells were the contracts offered to people participating in the GAME_JAM contests. Game developer and GAME_JAM participant Adriel Wallick described these waivers on her blog, saying that they included “clauses about being allowed to misrepresent us in any way on any topic for ‘dramatic effect.’”

The event had to be postponed while these contracts were renegotiated. Jared Rosen wrote in his Indiestatik post mortem that while the contracts were “standard practice for a production company,” they “failed to understand what game developers actually do.”

Adriel Wallick went on to describe the oppressive atmosphere during the first day of GAME_JAM, where contestants had to compete in a Mountain Dew sponsored film set, for Mountain Dew themed prizes, while drinking nothing but Mountain Dew. “Guys with secret service earpieces and disheveled clipboards barked instructions on how to properly represent branded products,” wrote Rosen. Most of the mini-contest had nothing to do with game development, and tensions were already running high thanks to the huge on-set film crew and noisy surroundings.

Needless to say, it wasn’t very easy to concentrate on the task at hand. The corporate environment was already beginning to overwhelm the central cast of indie game devs, which included the creators of critically acclaimed games like Depression Quest (Zoe Quinn) and The Stanley Parable (Davey Wreden).

“You can literally trace back the entire crumbling of this show to one individual,” wrote Wallick. “Matti Leshem, CEO of Protagonist.” Protagonist has been Pepsi’s primary branding and media consultancy for the past decade, and Leshem was a constant presence on the GAME_JAM set.

According to accounts from several people present at GAME_JAM, Leshem’s behavior was brash and inappropriate throughout, culminating in a bizarre line of questioning where he attempted to get GAME_JAM contestants to admit that having a woman on their team put them at a disadvantage.

“He was also a huge liability, and everyone knew it,” wrote Rosen, describing Leshem as “some kind of middleman between Pepsi and the branding teams,” who wound up taking control on the GAME_JAM set “by virtue of being the loudest.”

Wallick, Rosen, and fellow GAME_JAM participant Robin Arnott all pick out one particular moment as the breaking point: Leshem asking Wallick’s group, “Do you think you’re at an advantage because you have a pretty lady on your team?”

“We hope that these words will be burnt into your memory superimposed over the backdrop of a [$400,000] train wreck,” added Arnott, in a Gamasutra blog post about the event.

According to Rosen, when contestants failed to give Leshem the controversial answer he was looking for, Leshem cut the cameras and began looking for a new angle.

“It went on down the line. Is Zoe off her game? Are women coders a disadvantage to their groups? Point by point, the questions were shot down, until he reached Adriel’s team and asked if they were at any sort of advantage by having a pretty girl with them.”

While game dev Zoe Quinn’s contract prevents her from commenting explicitly on what happened afterwards, Rosen’s account claims that she stormed off set after Leshem cornered her with a camera, “trying one last time to get a rise out of her.”

Leshem was fired within minutes, but it was too late to save GAME_JAM. Not only had it turned into a $400,000 fiasco (Rosen’s account also mentions various other problems, including technical difficulties on set), but several of the developers felt they could not associate their work with a company that could knowingly hire someone like Leshem. Even with him gone, the atmosphere was too toxic to continue.

The general consensus seems to be that the fault doesn’t lie with organizers Polaris or Maker Studios, but specifically with Leshem himself. The original idea of a YouTube show about game development clearly had enough traction to get some serious sponsorship money from Pepsi, but Leshem’s determination to create a conflict-fuelled reality TV atmosphere was just too different from the optimistic, collaborative nature of indie gaming culture.

Oddly enough, Leshem’s desire to create conflict just ended up inspiring the game devs to be supportive of one another. Once the cameras were off, some of the GAME_JAM participants began brainstorming ideas to organize a similar event the right way. Essentially, they were embodying the collaborative atmosphere that should’ve been there all along.

Following the rush of public posts from people describing their GAME_JAM experiences, the indie gaming community has been overwhelmingly supportive. Once Zoe Quinn decided she couldn’t stomach another minute on the GAME_JAM set, several other contestants quickly banded together to support her. Through strength of numbers, they made it clear that the situation was unacceptable. And like them, the wider community has been supportive now that their experiences are out in the open.

Not only was this a textbook example of how corporations can often fail to understand the subcultures they attempt to monetize, but it also proves that those subcultures have more intrinsic value than mere sponsorship deals.

Even following his lengthy takedown of an event he helped organize, Jared Rosen is still employed by Polaris, and each of the game devs are still well-respected in the community, even those who couldn’t speak out for contract reasons. In the end, the only person who came out of this mess looking truly bad was Leshem himself. As of Tuesday, he has not made any kind of public statement on the situation. The Daily Dot reached out to him on Twitter for comment, but he has yet to respond.