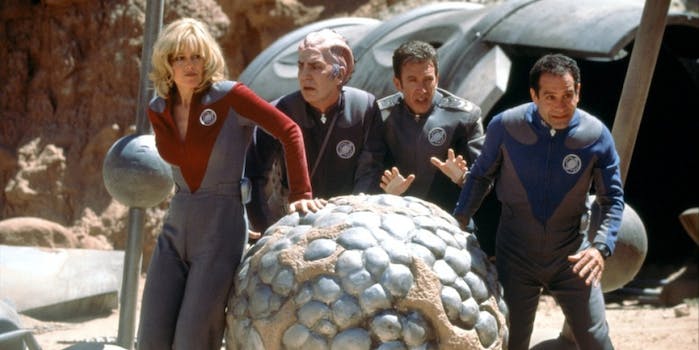 A ‘Galaxy Quest’ TV reboot is coming, but fans are apprehensive

By Grabthar's Hammer, is this really necessary?

Star Trek parody that turned out better than some official Trek movies, is getting a TV reboot.

The cult sci-fi satire followed a cast of washed-up actors who starred in the fictional Galaxy Quest series, affectionately poking fun at sci-fi fandom in such a shrewd way that Star Trek star George Takei jokingly called it “a powerful piece of documentary filmmaking.”

Now Variety reports that Paramount is adapting the 1999 movie for TV, although presumably not with Sigourney Weaver and Tim Allen in the lead roles.

The most common reaction to this reboot news is a rush of excitement followed by confusion. Is a Galaxy Quest series really necessary? The original movie is perfect on its own, with no real need for a spinoff—especially a TV reboot, which will stretch the joke out into a full series. Studios may be obsessed with remaking every ’80s or ’90s property they can get their hands on, but it’s difficult to imagine a Galaxy Quest reboot that lives up to the original.

I genuinely loved the Galaxy Quest film. Use it as prime example of satire with warmth. But does it need to be revisited? Does everything?

Sidenote: why "Galaxy Quest" tv reboot? Is this a netflix project too? Are we living in this perpetual age of 90's classic reboots?

Cynicism aside, there are a few ways Paramount can make this reboot awesome. Step one would be to hire the Toast’s Mallory Ortberg, who has heroically volunteered her Galaxy Quest expertise already.

Step two is to immediately acknowledge the ’90s reboot cliché, satirizing Hollywood’s obsession with unnecessary reboots. Perhaps the producers should seek out former Community writers who are Star Trek fans and work from there.