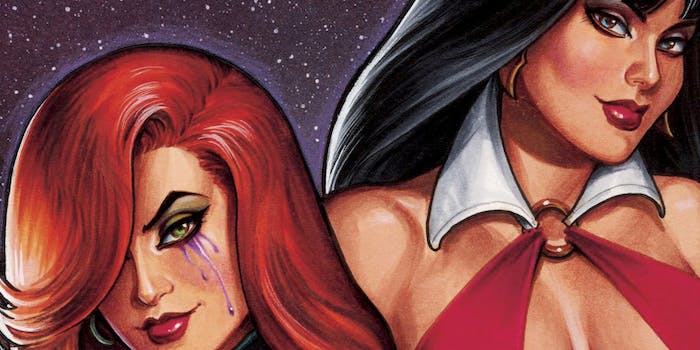 This is a comic event you won't want to miss.

Prolific comic writer Gail Simone is taking on three of the most popular female characters in Dynamite comics. Following her critically acclaimed Red Sonja run from last year, she will now bring the universes of Vampirella, Red Sonja, and Dejah Thoris together for the first time.

In a recent press release put out by Dynamite Comics, Simone describes the crossover event as a “big, fun, noisy event book, full of action and fun and drama and sex and villainy.” It’s a significant departure from her work on Batwoman, Batgirl, Birds of Prey, Wonder Woman, and the ever-excellent Secret Six—all stories that are generally less over-the-top and as grounded as a girl swinging from rooftop to rooftop could be.

It seems that Simone won’t be the only female writer tackling the crossover tentatively titled The Women of Dynamite. Simone has assembled a team “of the most talented female writers in the industry.”

Gail Simone writing Red Sonja, Vampirella and Deja Thoris, definitely not missing out on this

@GailSimone A GINORMOUS-SUPER-MEGA crossover, with you writing, & both Red Sonja and Vampirella? I shall now begin throwing money at you! :D

I AM INCREDIBLY EXCITED ABOUT THIS! All I had to hear was @GailSimone + more Red Sonja & I can’t wait to read it!!! https://t.co/nVjkfaQROn

It’s going to be interesting if general comic fans will embrace the new initiative set out by Dynamite. Many can be turned off by the overtly sexualized art design of the characters, but Simone has been known to class things up a bit.

In it’s release, Dynamite was also quick to emphasize the strength of the characters over their sex appeal.

“Gail has been an absolute pleasure to work with,” Nick Barrucci, CEO and Publisher of Dynamite Entertainment, said in a statement. “The thought of bringing together the strongest female characters that Dynamite publishes into an event has been discussed for years, and we could not be happier that Gail is the creator who will tell this tale.”