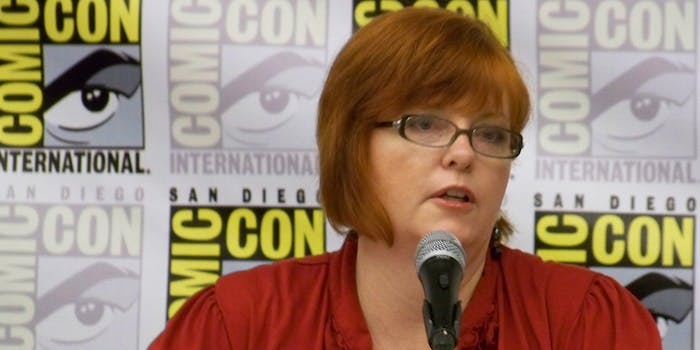 Think women don't read comics? Here's a hashtag for you.

Despite ample research showing that the fake geek girl is a myth, women in comics can’t catch a break from detractors trying to argue they don’t really exist.

The most recent argument is about new statistics claiming women now make up 47 percent of the comics market. A spate of denials from readers of Girls Like Comics prompted a discussion between the blog owner, Jessica Maybury, and other members of the comics industry, including lauded comic writer Simone:

I’ve been accused on https://t.co/uvJSwqvdXb of falling into the ‘ego trap’ of thinking women like comics because I want them to

@ComicsGirls What?? I know my brain’s fogged from lack of coffee on a Monday AM but how does that logic even work?!?

@GeekMelange check it out in the comments! Honestly I’m just tired of arguing. https://t.co/28QR3aflEK

Maybury’s tweets referred to two posts where she talked about the latest statistics for reader demographics that show the number of women buying and reading comics is on the rise.

Measurements of the industry from Comics Beat in February show that 47 percent of self-identified comics fans were female. Last week, Businessweek reported on May research from Publishers Weekly that found women ages 17 to 33 were the fastest-growing group of North American comics consumers. This makes sense with other recent news about the massive popularity of comics like Ms. Marvel.

Still, in discussing these stats on Girls Like Comics, one commenter insisted that the research itself was opinionated and that “no research has been done,” despite studies being done on multiple fronts.

Her tweets prompted a discussion of the presence of women in the industry by baffled Twitter users.

@ComicsGirls Heavens, I guess all those women that buy books at cons were just figments of my imagination.

Anyone who thinks girls don’t read comics is probably still arguing that the Earth is flat. @ComicsGirls @Ssnyder1835 @GeekMelange

Later, Simone came back with a vengeance.

The satirical hashtag instantly took off on Twitter, with many people joining in to play up the ridiculous assumptions about gender inherent in the idea that comics aren’t for girls.

@GailSimone #GirlsDontReadComicsBecause we don’t know how to read! let the men worry about that silly stuff

@GailSimone #GirlsDontReadComicsBecause they never show people laughing while they eat salads all alone.

@GailSimone #GirlsDontReadComicsBecause ugh, going through back-issue boxes is like totally going to ruin my manicure.

#GirlsDontReadComicsBecause there aren’t any articles about how to keep him happy in bed.

@GailSimone #GirlsDontReadComicsBecause Deadpool is the only male character who shows any skin.

#GirlsDontReadComicsBecause Spiderman wears his Spring colors all year round. @GailSimone

@GailSimone #GirlsDontReadComicsBecause life is just so scary outside of our kitchens.

Other participants took the hashtag a much more sardonic route, turning the joke inward to analyze the inherently gendered and troublesome aspects of comics, like fridged women…

#GirlsDontReadComicsBecause we’re too busy being shoved in refrigerators @GailSimone

@GailSimone #GirlsDontReadComicsBecause they’re too busy being killed off for the sake of a plot point ;)

…and attempts to distance manga readers from “real” comics readers, and the well-documented mistreatment of women in real-life comics shops.

#GirlsDontReadComicsBecause we get kicked out of comic shops when asking for anything non Marvel or DC. True story.

A small minority of participants took the tag literally, and not everyone was positive.

#GirlsDontReadComicsBecause they’re too busy coming up with clever hashtags. Make your presence known in the marketplace, not twitter…

With women comprising the largest growth sector of the marketplace, it seems women are making their presence known where it counts—in the stores, and, of course, on Twitter.