Ms. Marvel, Spider-Gwen, and the ongoing war against sexism in comics

Since it caused an Internet maelstrom in August, Manara’s variant cover for Spider-Woman Issue #1 has become iconic—though not for any good reason: 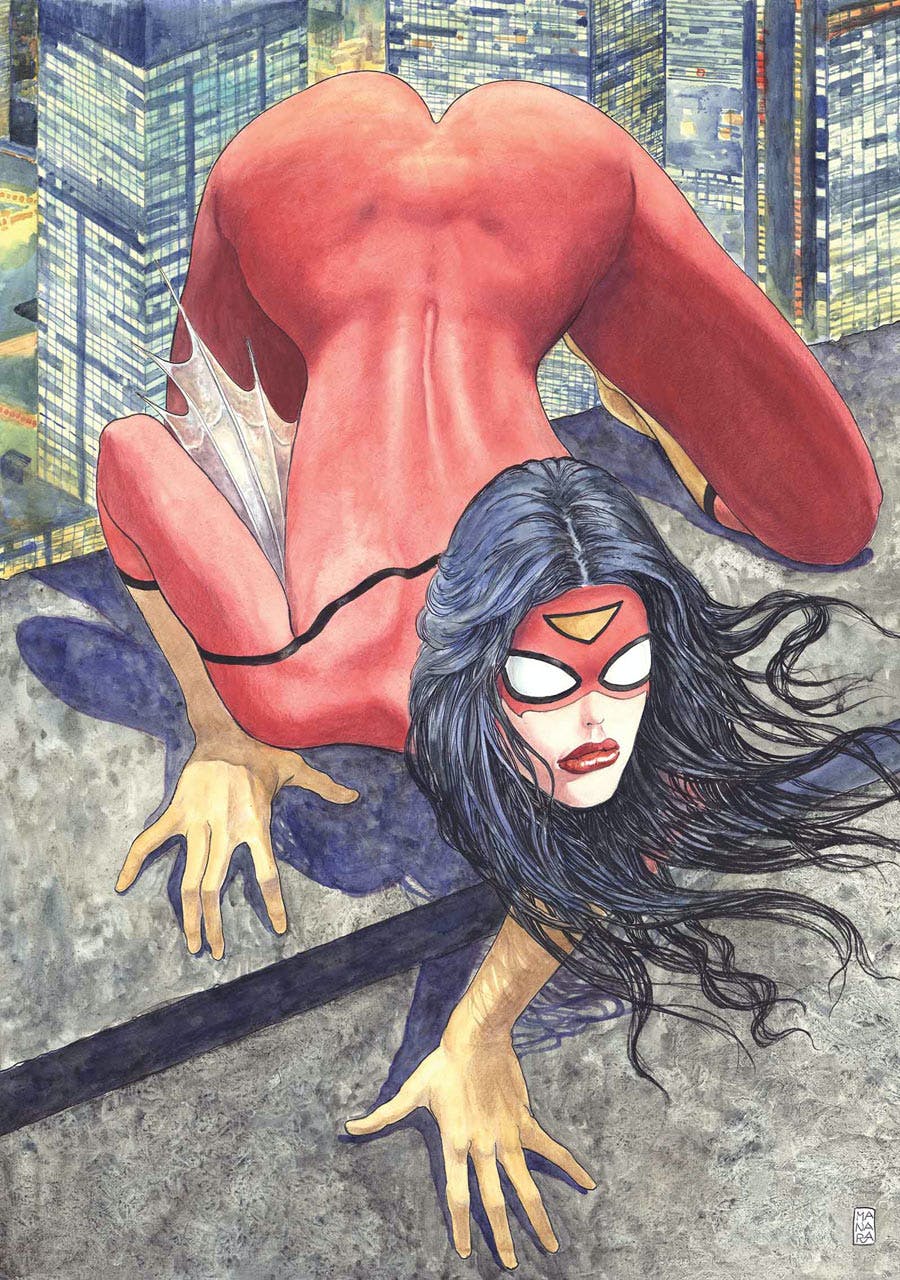 Since then, notoriously bawdy comic artist Frank Cho, who once got an entire Washington Post profile about his tendency to draw women with oversized boobs, has recreated the Manara cover twice. The first time, in January, Cho merely imitated the cover, complete with a gleefully voyeuristic Spidey.

But in his second recreation, from earlier this month, he updated the homage as a statement on brand-new teenage superhero Spider-Gwen: 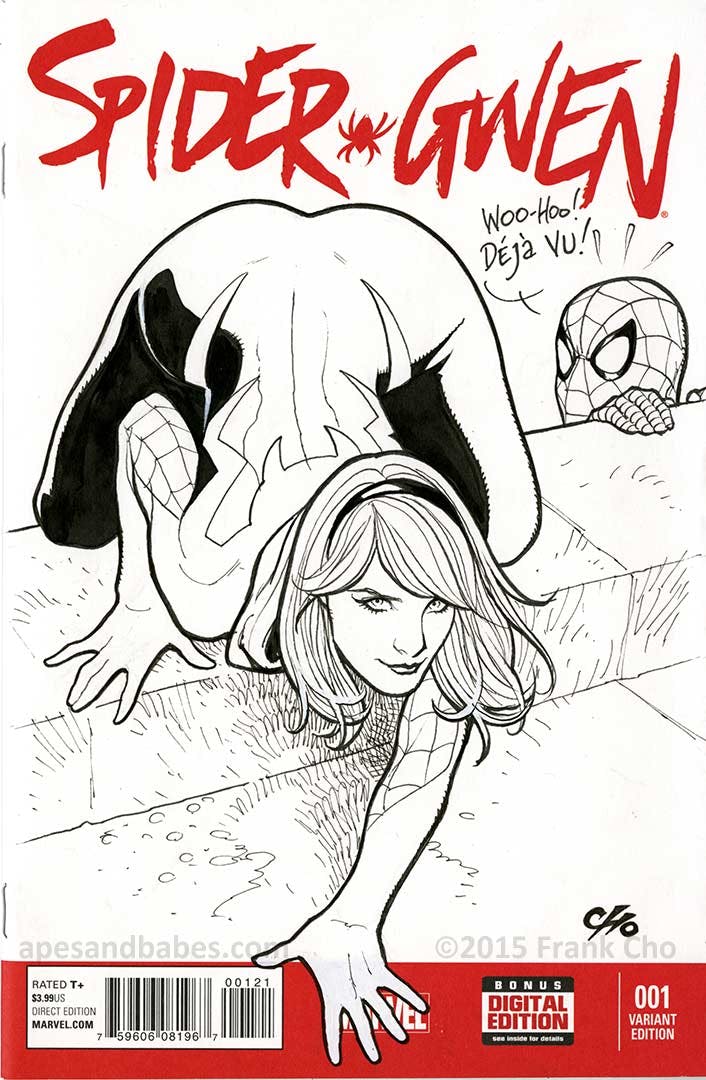 This time, the cover sparked outrage. Spider-Gwen‘s co-creator Robbi Rodriguez was not happy that his character, a teenage girl, was being sexually objectified as a way of mocking outrage over the sexual objectification of women:

The Mary Sue’s Sam Maggs offered a widely read takedown of Cho’s homage, pointing out that its point effectively undermined women who experience sexism, and that, speaking practically, it was completely inappropriate as a cover for a comic targeted to teen girls. It’s also a terribly snide way of undermining perennial Spider-Man girlfriend Gwen Stacy in her first outing as a superhero in her own right.

After the debate cooled, Cho issued a scathing rebuttal of his critics; while donating a $1,000 sale of the sketch to a domestic violence charity on Sunday, he lambasted anyone who disagreed with him as being members of a contentious vocal minority, guided by outrage rather than “common sense”:

The outcry over my drawing by the misguided few is nonsensical and simply stupid. It is an outcry over an imaginary slight, and an outcry of the desperate who want to make a name for themselves in the industry. It was fascinating, amusing and appalling to see the overzealous critics of my art use faux outrage to air their personal demons and imagined injustices in the world. I can’t stress enough what utter nonsense and a waste of energy this whole event has been.

Cho reportedly prominently displayed the sketch and had it on sale at last weekend’s MegaCon and this weekend’s Big Wow conventions. His repudiation of his critics, along with the $1,000 sale, apparently prompted G. Willow Wilson to issue a string of invectives against the hypocrisy that plagues this kind of debate in the world of comics.

To visualize the artistic double standard that Wilson is talking about, it might be good to compare the Manara/Cho variety of “sexy portrayals” with the kind of “sexy portrayal” of a male superhero that does make it into the spotlight. In 2012, I posted a roundup on Tumblr of the superhero artwork of artist Joe Phillips, who had displayed his works at a San Diego art gallery during Comic-Con in 2011.

Phillips’ “beefcake” superheroes are clearly homoerotic callbacks to Tom of Finland, but I initially tagged my post, as did others who reblogged it, with a reference to the Hawkeye Initiative—the famous Tumblr meme which genderbends male superheroes by putting them in stereotypically “sexy female superhero” poses. Here’s his take on Batman: 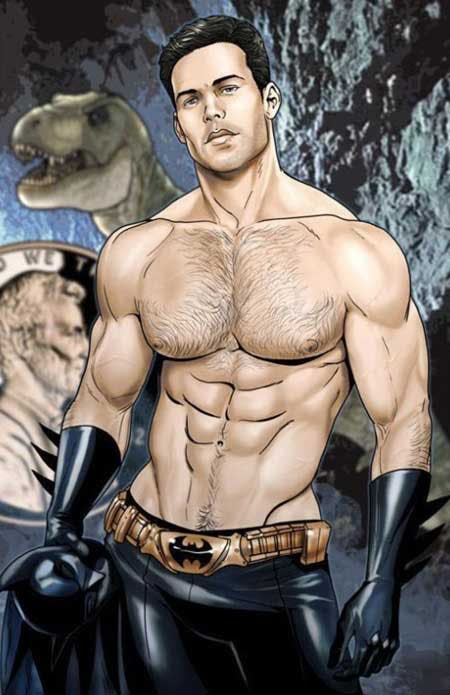 A debate arose about whether Phillips’ artwork objectified male bodies in the ways that the Hawkeye Initiative attempted to outline. Tumblr user caffeinesbian posted a brilliant takedown on the difference between what we see in the image above and what we see in a supine, physics-defying pose like Manara’s:

If you want THESE pictures to do what the Hawkeye Initiative does, you have to make their waists so small they can’t hold internal organs. You have to TAKE AWAY all of their muscles! NONE of them should look like they weigh over one hundred and thirty pounds. (And that’s fucking generous.) They can have a slightly toned concave stomach instead of all that muscle mass. Also they should be posed SUBMISSIVELY and VULNERABLY, that means they shouldn’t be looking at the audience saying “fuck you”, they have to say “fuck me.” (Here’s a definition of the fuck me look.) None of that male modelling crap with their arms behind their heads, flexing.

Also I want their legs spread more so their crotch is center stage. They should be a torso and limbs attached to a crotch. Or if it’s a back view, an ass. (Because male breasts aren’t sexualized they can’t just look like limbs attached to a chest, that won’t accomplish the same effect.) Oh, and their expressions need to be different. They need to practically look like they’re having an orgasm.

So yeah I want to see ANATOMICALLY INCORRECT, SKINNY, UNDERWEIGHT, VULNERABLY POSED men who’s image says nothing more than “please bend me over and fuck me hard, I’m a powerless sex object only here to compliment your ego” with large come hither eyes, to an audience of women.

I feel I should note that even though Phillips’ “beefcake” art positions these male superheroes as fully empowered, masculine, confident, and strong—not to mention, you know, within the realm of anatomical reality—plenty of male viewers still felt threatened upon being presented with the artwork, with some calling it “disgusting” and others missing the point of the commentary. Still others noted that their own “uncomfortable” reactions to the art underscored how uncomfortable women feel when they are sexualized in similar ways.

Unfortunately, we’ll never know what the reaction to Wilson’s example of submissive male artwork might have been.

Though Wilson’s point highlights the artistic double standard, it’s also worth noting that while the artwork she describes never saw the light of day, both Manara and Cho went on to profit from their covers: Cho by successfully selling off his sketches, and Manara by ultimately seeing his variant cover in print.

Last month’s variant Batgirl cover, a dark, misogynistic homage to Alan Moore‘s The Killing Joke, was too much for Oracle fans, including the artist himself. After days of online debate, DC Comics opted not to publish the variant because it was completely inappropriate for Batgirl‘s target audience of teenage girls and young adult women. Cho, however, had no connection to the official Marvel Spider-Gwen issue, so there was no one to make the executive decision that the joke might make readers uncomfortable.

Still, it’s obvious not everyone is ready to move on from the Manara cover, no matter how many times it’s been parodied at this point. In a post-Gamergate world, it seems clear that rampant sexual objectification in geek culture leads to the devaluation of women’s lives and to very real sexual harassment. Women are the fastest-growing reader demographic in comics, yet they still routinely get harassed, fake geek girl’d, and confronted with hypersexualized images like these. And then, as a bonus, they get mocked by the very people who make them uncomfortable.

Cho may have intended his art to be tongue-in-cheek; but it’s increasingly hard for female comics fans to laugh.