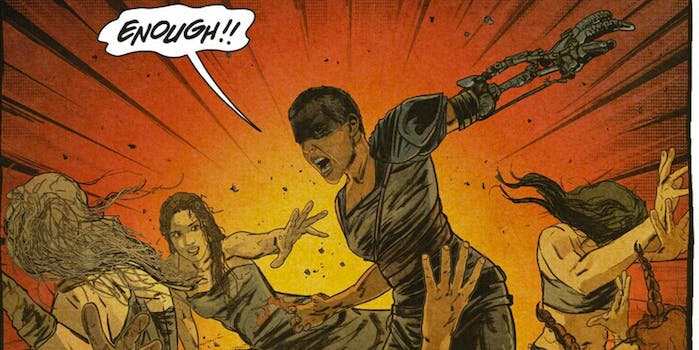 This is almost enough to ruin everything that was amazing about the movie.

We probably should have known this high was too good to last.

One of the principle creators of Mad Max: Fury Road has responded to criticisms of sexism with the kind of comments that have us questioning whether the film is the feminist miracle we thought it was.

In case you’ve been living under a rock, Fury Road has been widely hailed as the most feminist action movie in history. It’s hard to overstate how much the film means to genre-loving women who are used to getting their tropes served up with an endless onslaught of demeaning depictions of female characters. By contrast, Fury Road depicts women as fully realized human beings with control over their own lives. It utilizes a rare unsexualized portrayal of rape. Its plot is driven by an overtly feminist worldview. And Charlize Theron’s character Furiosa has been widely hailed as a groundbreaking new kind of action hero.

Given all this, the release of a series of standalone backstory comics to the movie, written and released shortly after Fury Road, has drawn particular interest from fans, especially the tie-in comic called Furiosa. 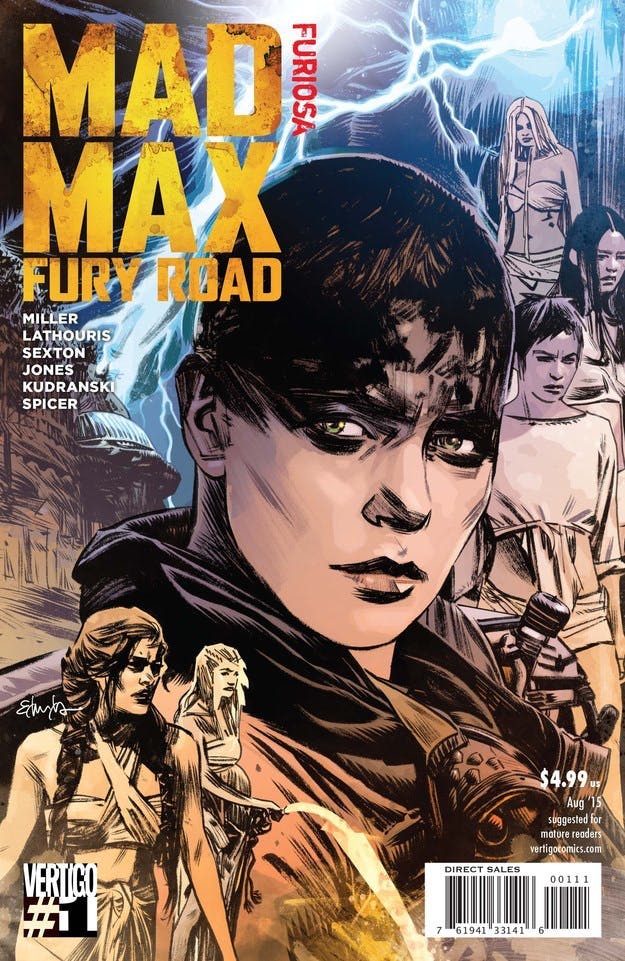 But as it turned out, Furiosa the comic was the polar opposite of Fury Road. It was, in fact, incredibly, appallingly misogynist. To skim off the top of a comic that’s essentially a vat of steaming toxic ooze, here’s a short list of some of the things you’ll find in Furiosa: 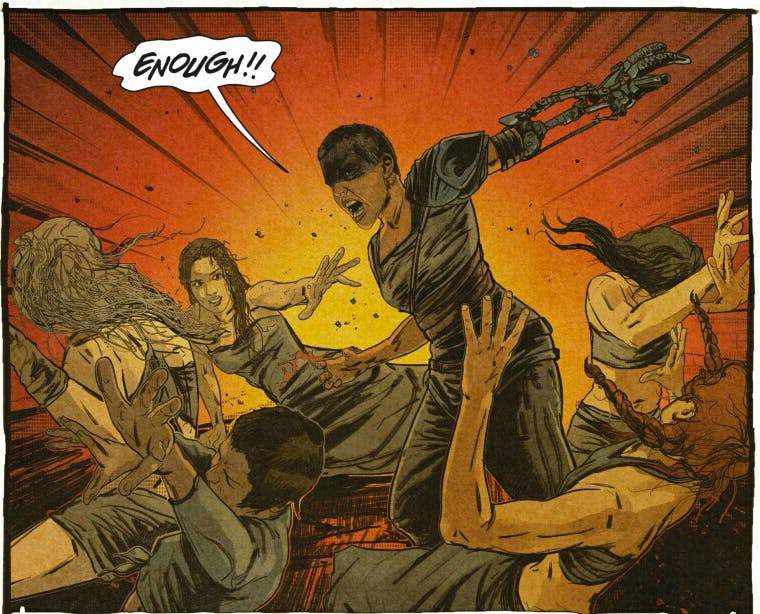 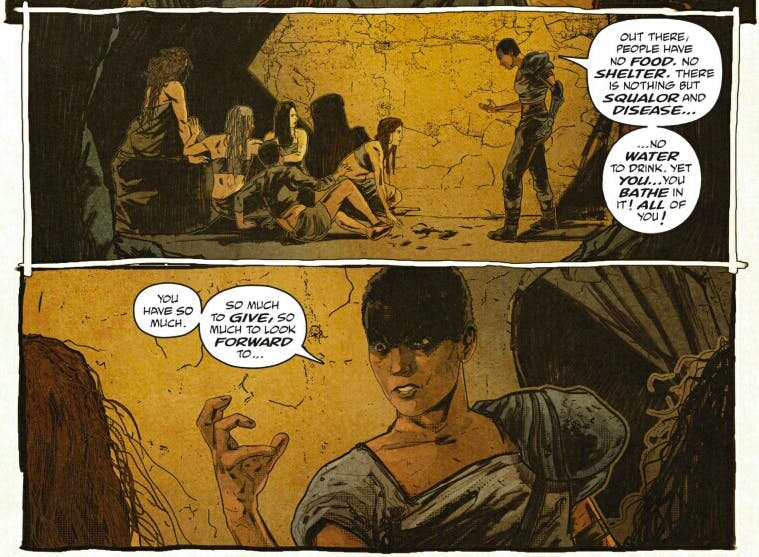 In case you were on the fence about whether any of this makes a good story, let’s be clear: This is all terrible. Women are people with brains and a need for basic human rights. They don’t require a benevolent rapist to instill in them a desire for freedom, or to educate and awaken them about their own agency. And again, this is just the short list of the many instances of galling sexism, misogyny, and even transphobia that somehow manage to appear in Furiosa.

Mad Max director George Miller’s name headlines the comic, and there’s been much speculation about how much he oversaw before publication. The other members of the writing team are all men, two of whom, Nico Lathouris and Mark Sexton, served as screenwriter and lead storyboard artist for the film itself.

It’s tempting to wonder if any of them thought to ask a woman to check their work to make sure it wasn’t grossly offensive to actual women. But as it turns out, one of the male writers of Furiosa did have lots of thoughts on the subject of the rape in the story and the reason the wives were depicted the way they were. On June 17, a female reader asked Mark Sexton about the way rape was used in the narrative, because of course she did.

Sexton’s responses indicate that the writers never second-guessed the decision to foreground the rape of the wives in the comic. While their sexual slavery was an omnipresent shadow over the film, rape itself was never portrayed onscreen, much less depicted as sexual or a price paid for the comfort of captivity. But Sexton’s thoughts on the way rape functions in the story have troubled many readers:

@KameronJdevine We showed the rape..? Er… Did we?

This is an easy question to answer: Yes. The comic opens with a shot framed between a woman’s spread legs as a group of men forcibly inspects her vagina. This is a depiction of rape, and only one of an entire series of rape scenes.

But Sexton had more thoughts.

@KameronJdevine Interesting. Could answer this any number of ways…

@KameronJdevine – but without it, the story could be viewed merely as a bunch of young spoilt girls whining about being kept in relative –

@KameronJdevine – luxury by an older man who's concerned with their safety. Not really much room for dramatic tension there..!

What? A group of women who were kidnapped in childhood and forced to spend their entire lives serving an evil despot might have been read by the audience as whiny spoiled brats unless their narrative showed them being raped? There wouldn’t have been any dramatic tension in the story of a harrowing escape by a group of kidnap victims without showing those victims being raped?

It gets worse. Sexton has also been trying to (politely) explain the comic to critics on Twitter.

@thelindsayellis Yes it IS creepy. And uncomfortable. But if you understand why the Wives wanted to escape the Dome, then the story did –

@thelindsayellis – its job. But thank you for caring enough to make your point of view! I appreciate it.

@Chris_BCP it was, but you hit the nail on the head – if you understood WHY the Wives wanted to escape, then the story did what we wanted.

What Sexton seems to be implying here in these tweets is that without the rape we wouldn’t have understood why the women wanted to leave—because, again, being kept their whole lives in a literal sealed vault isn’t motivation enough for the audience to understand. Apparently, we also need to see the women being raped, sexually threatened, backhanded by another woman, forced to halt an abortion, and ordered to feel “more grateful” for their captivity in order to get why they wanted to leave.

This is utterly bizarre. It’s bizarre by an standard of logic except the tired principle in fiction that rape motivates any action the plot may require, including the “growth” of the victim. The women of Fury Road were, on screen, empowered from the first frame. The women of the comic are ones who need to be raped to be motivated to escape their captivity.

As gross as this is, it gets worse. A review of the comic from the Rainbow Hub points out that the part of Furiosa’s backstory where we learn she was once one of Immortan Joe’s wives was already on record as stated by Theron in an interview:

This is not in the movie: this is stuff that we talked about, backstory about how she ended up with no arm and that she was discarded. She couldn’t breed, and that was all that she was good for. She was stolen from this place, this green place that she’s trying to go back to. She existed for a sole purpose, and when she couldn’t deliver, she was discarded— but she didn’t die. Instead she hid out with those war pups in the world of mechanics, and they almost forgot she was a woman.

The fact that Theron frames Furiosa’s character this way, in terms of her uselessness to Immortan Joe (“that’s all that she was good for”) has pretty awful implications in terms of the Furiosa comic. The comic is full of the idea that the women’s value revolves around their worth as sexual property.

If Furiosa also previously viewed herself in terms of her worth to Joe, then it makes her speech to them about how they should be humble and grateful 10 times worse on the scale of “oh god no, how did this ever get published.” The implication is that if she’d only been able to be fertile, she wouldn’t have wanted to leave her life of sexual enslavement. In the comic, all of these women, including Furiosa, are seen as being naturally ignorant of the fact that freedom from Joe’s rule is a good thing until they’ve been enlightened by someone else.  Joe kicks Furiosa out of the wives when she can’t breed; Joe gives them books and education and a teacher, and finally assigns Furiosa to guard them. Ultimately, Joe’s will and actions stand behind their entire escape.

To make all of this worse, Sexton has been describing the backlash—specifically, the many women upset by the developments of the comic—as variously being “angry,” “reactive,” “lazy,” and throwing “teenage temper tantrums.”

@Vulvavenger @TRexJones Hey there, thanks for at least reading the book. Seems to polarise opinion, glad folks feel strongly about it –

@Vulvavenger @TRexJones – though I find it confusing that there's some who are upset by the content. Extremely reactive responses are fine –

@Vulvavenger @TRexJones – but I feel there's a lot of lazy and not well thought out things been thrown at us. Ban all male creative teams?

@Vulvavenger @TRexJones come on. Seriously. This kind of response smacks of a teenage temper tantrum, and isn't realistic. Nor practical.

This is pretty much textbook mansplaining. And the worst part is that Sexton, who was a lead storyboard artist on the film, directly contributed to the feminist miracle that is Fury Road—as he was quick to remind us.

@Vulvavenger @TRexJones This IS the story that George Miller had. Written by the people who wrote the screenplay for the film.

Earlier this week, the Frisky reported that a representative of DC‘s Vertigo imprint, which released the Mad Max tie-in series, was refusing to comment on the controversy surrounding the issue.

It looks as though once again the women of Fury Road—this time the women in the audience—are on their own.