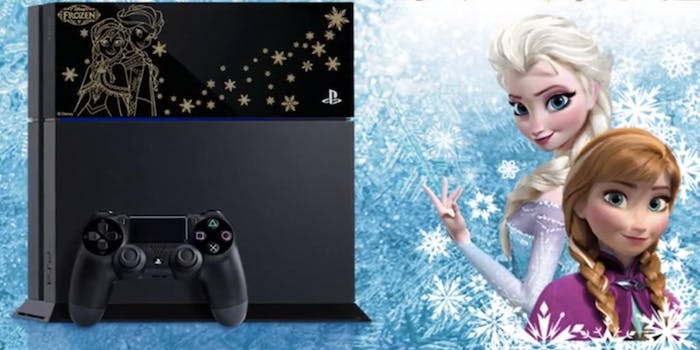 Do you wanna build a ‘Frozen’-themed PlayStation 4?

For the first time in forever, we wonder if it's gone too far.

It seems that the Frozen craze will not end, no matter how hard you try to get “Let It Go” out of your head. In an odd mashup of product placement, Sony’s PlayStation 4 will be getting a limited edition Frozen variant in Japan.

Details are scarce as to why this limited edition exists. The only Frozen video game is on the Nintendo DS and 3DS. There are Frozen toys that accompany the Disney Infinity video game that is set to release on the PS4 later this year.

But it’s probably a safe bet that it’s because Frozen sat at No. 1 in the Japanese box office for 16 weeks running. It took Disney’s Maleficent to knock it off. Lest anyone forget, it was also in Japan that a Frozen fan reportedly filed for divorce against a husband who didn’t understand the movie’s popularity.

The most odd thing about this bundle is that it doesn’t come in white. Doesn’t common sense dictate that a Frozen themed product come in the color of snow?