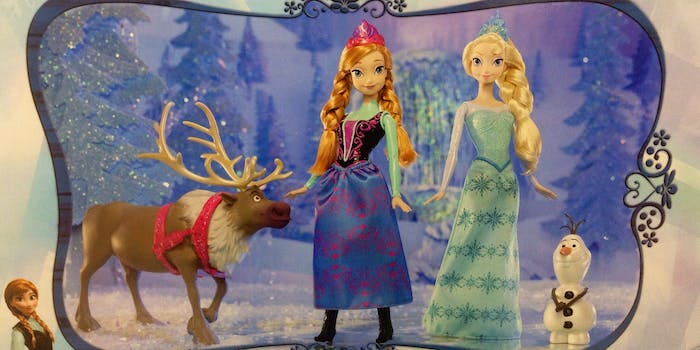 For the first time since the National Retail Federation (NRF) launched its annual Holiday Top Toys Survey in 2003, Barbie is not the number-one item that parents plan to buy for their girls. This year, it’s all about Disney’s Frozen.

According to the survey, 20 percent of parents said they plan to buy Frozen merchandise for their girls this year, versus 16.8 percent who said they planned to buy Barbie items.

“Barbie has been the top girls’ toy for over a decade, but it is no surprise that Disney’s Frozen has taken the top seat as children have had it on the mind as far back as Halloween,” Pam Goodfellow, director of Prosper’s Consumer Insights, said in a statement. Prosper Insights & Analytic conducted the survey for NRF.

Frozen‘s victory does seem inevitable, given that the demand for products from the popular film hasn’t waned over the last year. Even so, Disney must be pretty happy to have more confirmation that the blockbuster is still at the top of consumers’ minds this season.

The two lists, which differed widely at the top, reflected the impact of common marketing practices on parents’ gendered thinking about holiday gifts. Still, there were a few items on both lists, including LEGO sets, tablets, and the iPad, which stands at number 7 for girls and number 10 for boys.

The survey was conducted between Nov. 3 and Nov. 10, and polled 6,593 consumers. You can see the full top-ten lists and more survey data on NRF’s website. If you need help beating the upcoming holiday rush on Frozen merchandise, check out our Frozen shopping guide.

H/T The Huffington Post | Photo by JeepersMedia/Flickr (CC BY 2.0)