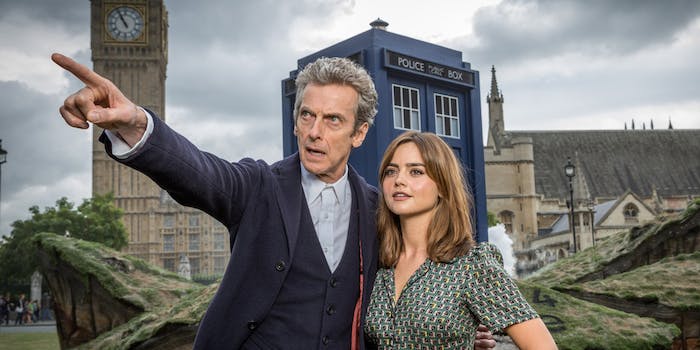 Free Comic Book Day is a smorgasbord for TV fans

Fans of 'Doctor Who', 'Bob's Burgers', and more will want to visit their local comic shop today.

The first Saturday in May is Free Comic Book Day, bringing tons of one-off free comics to stores around the world. Marvel and DC are both trying to entice readers into following their Secret Wars and Convergence events, but there’s still plenty on offer for people who want to look beyond the superhero genre—or are completely new to comics.

This year’s free comics include unlikely spinoffs for Bob’s Burgers and Fight Club, along with a handful of other TV-inspired comics. This subgenre can be hit-or-miss, with some examples feeling like an easy way to cash in on a well-known TV series. However, there are a few TV comics that live up to the original, such as Buffy the Vampire Slayer’s later comic “seasons” carrying on as a worthy canonical sequel to the series.

As usual, this year’s FCBD comics are a mix of single-issue freebies and collected excerpts from multiple titles by the same publisher. Here’s our guide to the spinoffs from your favorite TV shows. 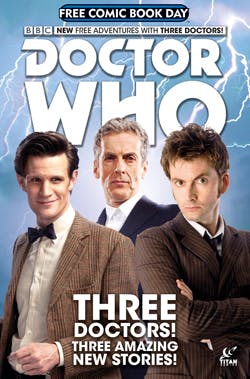 The Doctor Who sampler is, for obvious reasons, mostly aimed at Doctor Who fans. The free issue includes excerpts from three new stories about the 10th, 11th and 12th Doctors (that’s David Tennant, Matt Smith and Peter Capaldi), plus a sneak peek at something they’re describing as a “top secret” summer event. Although since the Internet exists, any new Doctor Who clues and spoilers will undoubtedly have been digested and regurgitated by fandom well before this comic actually hits the shelves.

The main draw for this comic is that it was created by the show’s writers and animators. It’s a greatest hits collection from existing Bob’s Burgers comics, and looks like it will be easily accessible to anyone who watches the show. 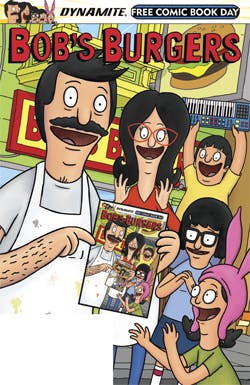 The Simpsons’ giveaway is an obvious choice for kids, because everyone is familiar with the cartoon and there’s no need to keep track of continuity. Bongo Comics has been producing Simpsons tie-ins for more than 20 years, so they probably know what they’re doing.

If cartoons are your jam, then you may also want to check out the free SpongeBob comic from Boxtrolls director Graham Annable.

Dark Horse’s sampler comic is sure to be snapped up quickly because it features part of the new Fight Club comic written by Chuck Palahniuk and drawn by Cameron Stewart. You can tell immediately from David Mack’s cover art that this is one of the more mature FCBD comics, so for obvious reasons it’s probably best to steer younger readers toward titles like Avatar: The Last Airbender instead. 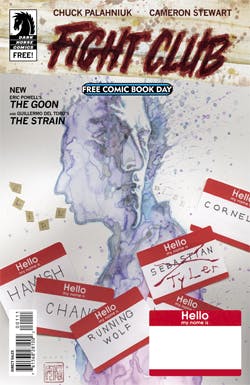 While Fight Club is the big draw here, the Dark Horse sampler also includes an excerpt from Guillermo del Toro’s The Strain. This vampire horror story began as a novel trilogy cowritten by Chuck Hogan, before being developed into a TV series starring Corey Stoll. The third and final sample comes from The Goon, an ongoing supernatural horror comic written and drawn by Eric Powell.

This may look like an Avatar: The Last Airbender comic, but it’s actually a sampler for three of Dark Horse’s all-ages titles: Bandette (a costumed teen burgler/crime-fighter adventure story with distinctive art from Colleen Coover), a tie-in for the game Plants vs. Zombies, and ATLA. 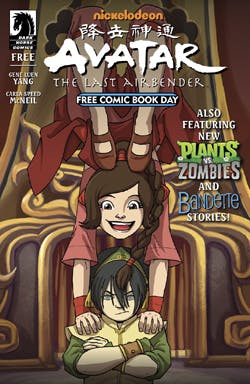 ATLA tie-in comics tend to be excellent, either written by or with significant input from the show’s creators. They expand the ATLA/Legend of Korra universe as sequels to the show, with this year’s FCBD sample focusing on the characters Ty Lee and Toph. It was drawn by Carla Speed McNeil and written by Eisner Award winner Gene Luen Yang, who is just about to take over DC’s main Superman comic with artist John Romita, Jr. (You can check out an excerpt from his new Superman in DC’s free Divergence intro comic, by the way.)

Although you can just go home with a handful of free comics, it’s polite to buy something while you’re in the store. (We actually find it very hard not to blow our whole paycheck.) If TV spinoffs are your jam, you might want to try Buffy seasons 8 and 9, the Firefly comics, The Middleman or Orphan Black—or the graphic novel series that originally inspired The Walking Dead.