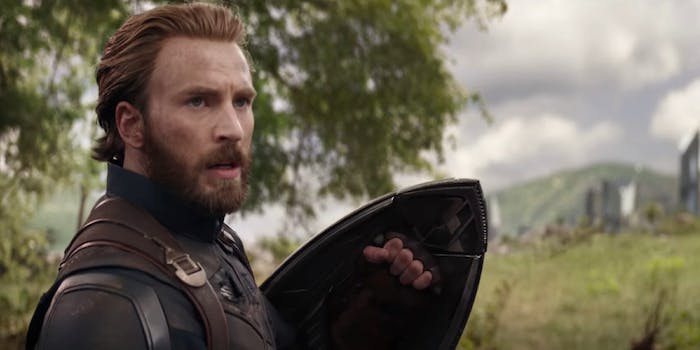 'There have been rumors.'

Chris Evans is officially hanging up Captain America’s shield after Avengers 4, and with Marvel mum about the future of the franchise, one actor is fueling speculation as to what Marvel might do with the character.

Speaking to Larry King, Frank Grillo—who portrayed Brock Rumlow and the villain Crossbones in The Winter Soldier and Civil War and is reportedly in Avengers 4—was asked about the end of Evans’ run and who might play one of Marvel’s biggest superheroes next.

“I don’t know, but there have been rumors that Captain America could be an African-American, it could be a woman, you know, so they’re looking,” Grillo said.

As far as we can tell, Grillo isn’t operating on any insider knowledge about the next Captain America; he’s simply repeating rumors that he’s heard. And there’s certainly precedent for Captain America to live on even if Avengers 4 is the last we see of Steve Rogers. Steve isn’t the only Marvel character to operate under that name.

Sam Wilson (who also goes by Falcon) took up the mantle in a recent Marvel series after Steve aged rapidly due to his Super-Soldier Serum being “neutralized.” Bucky Barnes also temporarily became Captain America after Steve’s death in the comics but eventually returned to being the Winter Soldier. (It also has precedent with other characters, with Jane Foster becoming Thor.) At the end of Infinity War, both of the likely replacements—Bucky Barnes and Sam Wilson—have been disintegrated by Thanos’ snap, so in order for one of them to take up Captain America’s mantle, there would need to be some kind of reversal.

But while Grillo isn’t necessarily saying that the next Captain America will be Black or a woman, it still feels very much in the vein of Marvel “promising” LGBTQ characters in future Marvel movies and the trend of using press interviews to showcase representation that isn’t apparent in the films or former Doctor Who showrunner Steven Moffat telling fans for years that the Doctor could be a woman before finally admitting that he never made the change to cater to sexist fans.

It certainly would be a welcome change in the MCU, especially if a character we weren’t expecting (or doesn’t have comic book precedent) steps up. But until Marvel Studios makes that move—and Marvel is remaining tight-lipped about the futur—it’s just speculation. And if Marvel isn’t going to move in that direction, fueling rumors might give some fans false hope and lead to disappointment if they see someone like Bucky taking up the mantle after Steve Rogers’ fate is sealed.