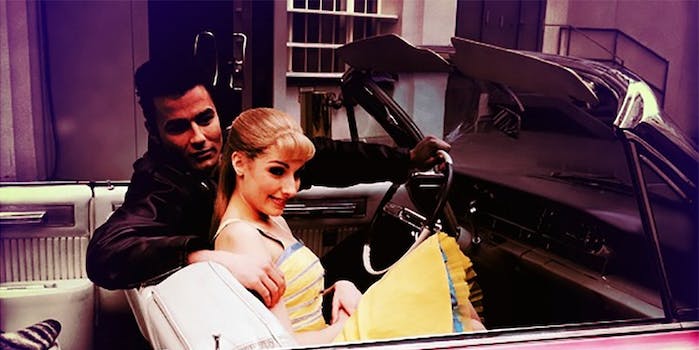 Fox is producing a live ‘Grease’ musical in 2015

You may be the musical the Internet deserves, but you're not the one that we want.

Get ready to burn up the quarter mile by driving far away from Fox’s newly announced production of Grease.

Fox apparently thinks that after the success (and widespread ridicule) of NBC’s The Sound of Music that it knows what the avid, musical-hungry public wants next.

And since NBC only seems to want G-rated material for its live stage musicals (its next offering is Peter Pan), who better than the American Idol-touting, Glee-sporting, PG-13-rated Fox to bring Grease to the stage?

The studio announced that Grease is scheduled to air some time in 2015.

Shana C. Waterman, Senior Vice President of Event Series for Fox, stated in a press release yesterday that the “iconic characters and addictive songs” of Grease “make it the perfect fit for FOX, and we’re going to give it the kind of star power and production quality to make every Sandy, Danny, Rizzo, and Kenickie out there want to get up and sing along.”

In other words Fox thinks the chicks’ll scream. After seeing NBC’s disastrous production of The Sound of Music, we’re skeptical on that front. The only good thing about The Sound of Music production, which had the nerve to cast Audra McDonald as a side character, was the pizza.

So yeah, color us cynical. Although given that Fox is known for ferrying Idol contestants and Glee cast members into other productions, we wouldn’t be surprised if Fox turns up a few familiar faces. Seeing Glee hearthrob Darren Criss as Danny might make us feel a bit more charitable.

Hell, why not imagine his blond paramour Chris Colfer as Sandy? While we’re dreaming of a gender-bent Glease mashup, let’s just go all out and throw in Lea Michele as Rizzo and Matthew Morrison as Frenchy. We’ve always known Will Schuester was a beauty school dropout.