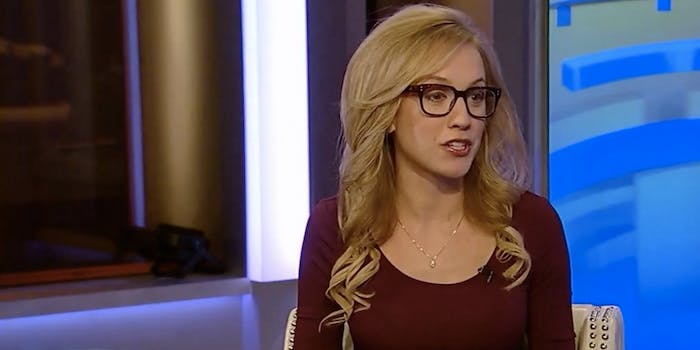 Get a good look at the Dark Side.

As a National Review reporter and Fox News contributor, it’s Katherine Timpf’s job to kick the hornet’s nest that is the Internet. But a recent dig about Star Wars fandom has provoked an especially toxic response.

More than a month ago, in the wee hours of the morning, Timpf took part in a breezy panel discussion about Star Wars hype on the Fox show Red Eye. “I have never had any interest in watching space nerds poke each other with their little space nerd sticks, and I’m not going to start now. You people are crazy,” she said, later adding, “Yesterday I tweeted something, and all I said was that I wasn’t familiar with Star Wars because I’ve been too busy liking cool things and being attractive—people threatened my life.”

This week, Timpf shared some of the threats and insults she had mentioned—some of which were apparently deleted by the fans who had made them.

Nice that he at least gives an exact time! pic.twitter.com/K8DlC0C42R

Ohhhhhhh so I should be killed ok cool https://t.co/8Bhlhsu1tX

Some of the comments directed at @KatTimpf for joking about @starwars fans pic.twitter.com/Gdj7iHKZgU

Careful Dad or our whole family will be murdered https://t.co/lp4xd0o18w

Feel free to say that at my funeral https://t.co/sdxZAqyzNp

What are you even saying https://t.co/Yf5zBnoZTz

Telling me you hope I die of the disease that killed my mom while I'm missing her over the holidays is so kind pic.twitter.com/SXxrhOb673

But she didn’t stop there: Timpf doubled down with a National Review column titled “I Will Not Apologize for Making a Joke About Star Wars,” which is maybe the best proof yet that we all need to go outside and take some deep breaths. She explained that although she had received threats soon after her initial comments, the latest wave of abuse began with a lengthy YouTube attack:

The video’s uploader, though, stopped short of death threats, she said:

To be fair, AlphaOmegaSin did say that he denounced threats on my life because “Just because you’re a f***ing idiot doesn’t mean that you should have to die.” How sweet of him!

If Timpf wasn’t going to see The Force Awakens before, she sure isn’t going to now. Unless she gets a press pass to the world premiere, of course.