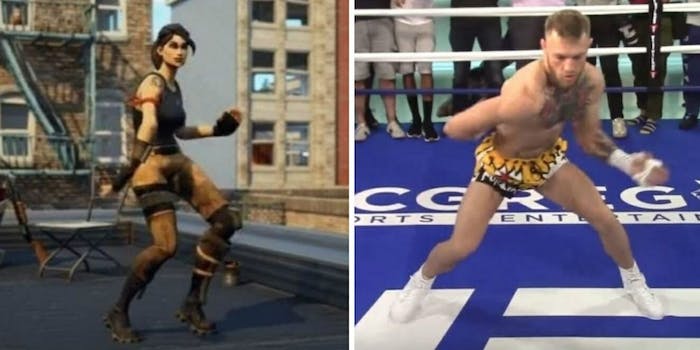 Conor McGregor is known as one of the best mixed martial artists in the world, a man who can start a meme by getting knocked out in the boxing ring, and a fighter who marries trolling and fashion together in revolutionary ways.

Now, a new Fortnite emote has been revealed, and people are pretty sure it’s based off McGregor’s loose-limbed flailing.

Wiggle your way to Victory!

The New Boneless Emote is in the shop now! pic.twitter.com/Q2ShzdMcpW

If that movement looks familiar, you’re not alone.

While the similarities of Boneless’ movements to McGregor might be purely coincidental, GameRant points out that Epic Games has taken inspiration from at least one meme and turned it into a game emote.

Wrote GameRant: “Just recently, the studio added an emote based on the Orange Shirt Kid, who became popular despite his dance not winning Epic’s Boogiedown contest. Future emotes in Fortnite may also take real world inspiration. In fact, Drake has promised to rap about Fortnite if Epic adds a Hotline Bling emote to the game.”

Epic has yet to introduce a Drake-themed emote, but we’re not counting anything out in the fast-moving and often updated world of Fortnite.

There’s little question the game—and battle royale games in general—crossed over from gaming culture and into the internet’s mainstream. Logan Paul, one of YouTube’s biggest stars, has switched much of his attention to livestreaming the game on Twitch—much to gamers’ chagrin—and Ninja, the most popular Fortnite streamer, is making at least $500,000 per month.

And if McGregor acknowledges that Boneless might be him, he could open up even more mainstream fans to the wonders of Fortnite.