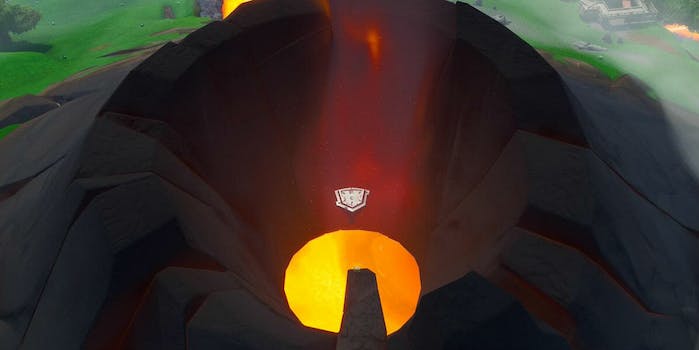 The Fortnite volcano is starting to erupt—and you can help

Sacrifice your loot to the Fortnite gods.

Fortnite introduced a massive volcano at the start of its current season, and now it’s starting to erupt. It’s billowing smoke during some matches, signaling another possible topographical shift to come.

The volcano started to release smoke earlier this week. Strange alien runes began appearing a few weeks ago. A fifth rune appeared earlier today, and the volcano’s smoke has intensified, occasionally spewing lava from its core or various veins, as well as some excavation sites on the map.

You can throw mats and ammo in the volcano🌋👀#Fortnite pic.twitter.com/wjSEqGaiBx

The rune features a meter that appears to slowly fill up the more items, ammo, and weapons players throw into the volcano. The idea appears to be that once the meter is full, the Fortnite volcano will erupt at its maximum strength and alter the map somehow. There’s no indication of when this may happen though.

Like many other Fortnite events, it’ll likely have a significant impact on what the map looks like during season 9, which begins on May 9. Prior to season 8, various earthquake tremors cracked the map. We’re currently in the middle of an Avengers: Endgame limited-time mode that pits Thanos against players dressed up as superheroes.