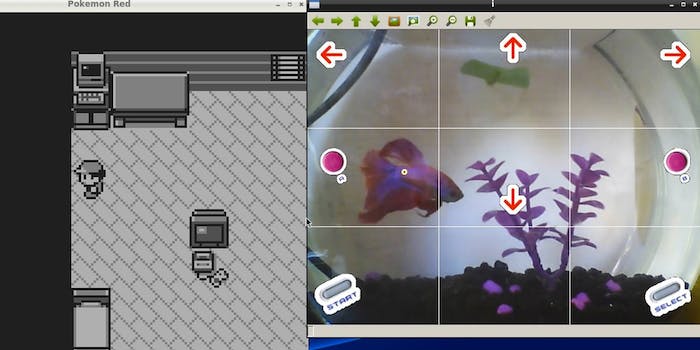 Thousands of people are watching this fish play Pokemon

Is this the future of video gaming?

First there was Twitch Plays Pokemon, an ambitious project that saw thousands of people take to game streaming site Twitch to collectively play Pokemon. Then, well, then there were lots more games of Pokemon with varying levels of difficulty and voting systems.

But the big new trend in online Pokemon is, bizzarely, a fish. A Twitch user has combined an emulator version of Pokemon Red with a webcam that points at his fish tank. The in-game character moves according to where the fish swims in the tank. Previous version of “Twitch Plays” worked by reading the comments from people watching the stream and translating them into button presses. But this time, we just have the fish to guide the character.

During the beginning section of the game, the fish selected its name as “Grayson” from the pre-selected names in the game. He also managed to acquire his first Pokemon, a Charmander he named “AAAABBK.” There hasn’t been much progress since. Despite winning his first Pokemon battle, the fish is now trapped in the player’s bedroom, repeatedly saving the game. Some Twitch users have expressed frustration with the slow progress of the gamer fish.

Many commenters have expressed concern over the fish’s wellbeing, which has led to the addition of a frequently asked questions section on the stream: “No, the fish is not dead. He just sleeps sometimes.”

So far, the fish has been playing Pokemon for 125 hours. Grab some popcorn, this is going to be a long one.