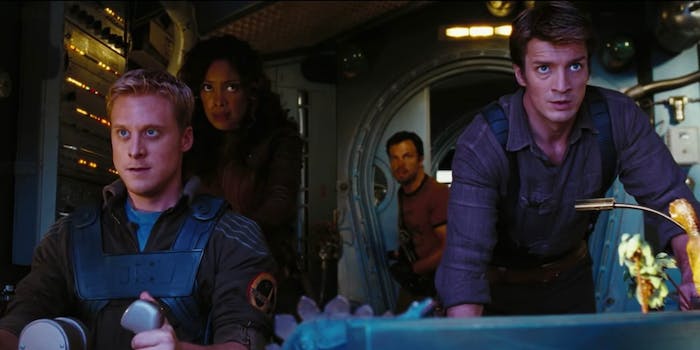 Joss Whedon is involved, too.

The chances of reviving the cult favorite Firefly are slim-to-none even in TV’s reboot-friendly age, but fans will soon have a new medium to further explore the adventures of the Serenity crew.

Titan Books announced that it’s publishing a series of novels that will take place in the Firefly universe with the first book arriving in the fall. Three books are currently planned—and will be considered part of the official Firefly canon—with series creator Joss Whedon on board as a consulting editor.

The first book, Firefly: Big Damn Hero by Nancy Holder, will arrive in October 2018. Fans won’t have to wait too much longer after that for the other two books, which will be published March and October 2019 respectively.

“[I am] delighted to be bringing new, official stories to fans of a show that has continued to grow in popularity over the years, finding new audiences in an unprecedented way,” Titan Books commissioning editor Cat Camacho said in a statement to Entertainment Weekly.

The books will follow the crew of the ship Serenity and its hijinks. Firefly: Big Damn Hero will find Captain Malcolm Reynolds (Nathan Fillion’s character) captured by a group of Browncoats, the soldiers he fought with during the Unification War. The second book, Firefly: The Magnificent Nine, is written by James Lovegrove and takes the Serenity crew to a desert moon after Jayne (Adam Baldwin) is called there by an ex. Firefly: Generations is written by Tim Lebbon and leads the crew to a legendary ship that they can salvage.

The three books announced to date offer a wealth of different ideas and adventures for fans to explore long after they’ve watched Firefly’s one season (and subsequent movie, Serenity), guaranteeing that they haven’t seen Serenity’s final voyage.