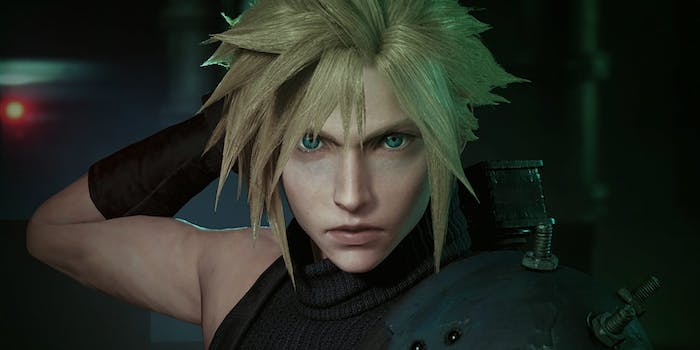 Patience is a virtue.

You will not get the entire Final Fantasy VII remake you’ve been dying for all at once, but Square Enix has excellent reasons for a staggered release.

Square Enix announced at PlayStation Experience on Saturday that the highly anticipated Final Fantasy VII Remake “will be told across a multi-part series, with each entry providing its own unique experience.” According to Kotaku, each entry in the series will have enough content to be equivalent to a full-sized game.

When Sony revealed a FF VII remake at its E3 2015 press conference, the audience erupted in raucous applause. FF VII is arguably the most famous Final Fantasy game of the venerable series, one that hails back to the original Nintendo Entertainment System. FF VII is the game from which Cloud and his iconic, massive Buster Sword hail.

FF VII was also published for the original PlayStation console, which means the graphics and sound of the original release are horribly behind modern standards.

Final Fantasy VII Remake, on the other hand, is being developed using Unreal Engine 4 which means the production values will be top-notch. The new trailer for the game revealed at PlayStation Experience looks fantastic.

Kotaku also translated a Dengeki Online story that explains why Square Enix is not releasing Final Fantasy VII Remake all in one go. Releasing the remake in parts means that Square Enix can avoid having to cut any content that otherwise wouldn’t have fit into a single release. Square Enix can also avoid cutting back on the level of quality that Square is aiming for.

To celebrate the upcoming release of Final Fantasy VII Remake, Square Enix has released the original game as a PlayStation 4 download. You can pick up the original for PS4 on the PlayStation Store for $10.87. On Dec. 13, the price will go up to $16.