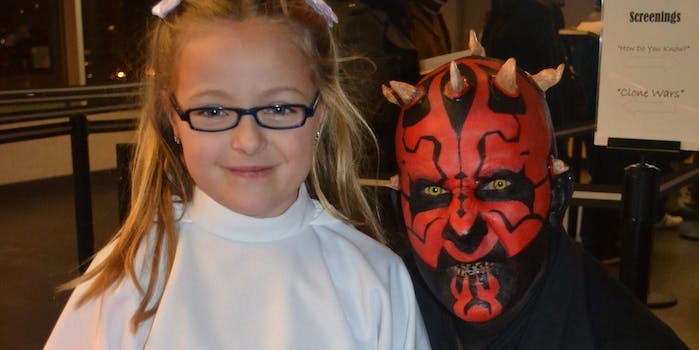 Help send the message that Star Wars is for everyone with this annual event.

Five years ago, a little girl named Katie was bullied for bringing a Star Wars water bottle to school. The boys who taunted the 7-year-old insisted that Star Wars wasn’t for girls. Katie’s mother, Carrie Goldman, shared the story on her blog Portrait of an Adoption, and soon it went viral. Members of the Star Wars and geek communities reached out to Goldman to share their support for Katie in numerous ways, including an event that is still being celebrated to this day: Wear Star Wars Share Star Wars Day.

It started when one of Goldman’s readers decided to create a Facebook event to be held on a Friday in December where people were asked to wear Star Wars clothes that day to support Katie.

“Tens of thousands of people signed up to participate, and many of them contacted us to ask if they could send Katie a special Star Wars gift,” Goldman told the Daily Dot. “Since Katie is not financially disadvantaged, I asked people instead to donate those Star Wars gifts to holiday toy drives. It seemed like an awesome opportunity to capture all the outpouring of love and support that Katie was receiving and spread that goodwill to other kids too. I named the event Wear Star Wars, Share Star Wars, and it took off.”

Goldman said her favorite part of the event was that she asked people who donated toys to include a Post-it note on them stating that the toy could be for a girl or a boy.

“Usually the people who volunteer for toy drives immediately place all Star Wars toys into a boys’ pile. And that would sort of defeat the whole point of why Katie needed support, so it was a neat way to try to effect change in terms of gender-based toy marketing,” she explained. “All these people uploaded pictures of Star Wars toys with tags saying ‘For a girl or a boy,’ and it made me so happy.”

The following November, Goldman began receiving emails asking if another Wear Star Wars, Share Star Wars Day would be held in 2011, and after some thought, Goldman decided to make it an annual event “in December to coincide with the holidays and the spirit of gift giving.” Today, the event is celebrating its fifth year, and fans are just as eager to show their support of Katie and anyone else who has ever been bullied and made to feel like they shouldn’t enjoy something geeky.

According to the event page, anyone interested in participating should feel free to “wear something Star Wars or science-fiction related” and “donate a Star Wars or science fiction toy to a child in need (but please put a post-it note on the new, unwrapped toy specifying that it can go to a girl or a boy; otherwise, these traditional ‘boy toys’ will be given only to boys). You can bring the toy to a hospital, a shelter, or drop it off with any charitable organization collecting toys.”

In a time when gendered toy marketing is still all too common, the geek community coming together for events like this is needed now more than ever to help stop bullying and encourage people to embrace what they love no matter what.

“Wear Star Wars, Share Star Wars Day sends the message to girls and boys that no one has the right to tell you what you are allowed to care about. Toys are for everyone. Star Wars is for everyone. Katie’s story was a big deal because it wasn’t really about Katie at all; it was about all the people who identified with her situation because it had happened to them or to their children,” Goldman said. “The message of the day is that it’s OK for girls to play with action figures, just as it is OK for boys to play with baby dolls or kitchen toys, or any of the items that are considered ‘girly.’ We need to stop labeling toys and movies by gender, because it limits everyone’s ability to interact in a healthy manner.”

See some more of our favorite Star Wars looks shared by fans below and share your own on social media using the hashtag #WearStarWars2014.

not much freedom in my work wear, but i'll still #WearStarWars2014 while i travel #StopBullyingNow pic.twitter.com/Vko2kjB3ko