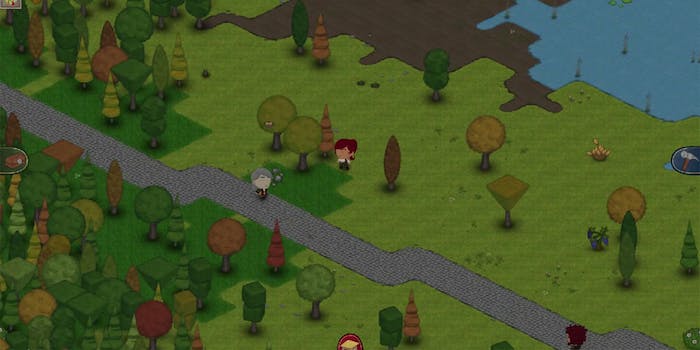 Leigh Harris, one half of development studio Flat Earth Games based in Sydney, has provided a wonderful example of how developers can make a simple tweak that has much bigger effects. In a developer blog post on Gamasutra about his game TownCraft, Harris talks about their decision to lay out the game’s character selection screen with the female character on the left.

“The reason for this choice harked back to my days in university, where I vaguely recall studying visual communication,” Harris writes. “There are a few basic things about two-dimensional layouts which stuck with me. One of those was that the present/normal/expected/standard is usually on the left-hand side of the page, while the future/unusual/exception/unique is on the right. This comes from the way we read text (in most Western cultures, I mean). The basic or original is followed by the variant or the alternative.”

Accepting that the video game industry is institutionally sexist, rather than an industry staffed by a bunch of sexists making video games, can be a tough distinction for people to make. Especially when everyone’s reflexive response to the suggestion of sexism is to deny and/or take offense rather than confront the issue at hand.

“At PAX Australia, where we launched TownCraft, we had a mixture of female and male avatars selected on our playable devices. After day one, we spoke about the general feedback and noticed that both my brother (and co-Director of our indie studio) and myself were receiving the same kind of praise regarding the inclusion of a female character. Some were thanking us for simply having a female playable character at all, several were pointing out how rare that made our game at that particular show, but perhaps most importantly, no one at all complained,” continues Harris.

Even a little user interface tweak can make a big difference in the way people see a video game. The challenge for game developers who want to make video games more inclusive is to seek out opportunities to make little decisions like these that lead to big payoffs. A video game doesn’t have to be a concerted conversation about diversity in order to make a difference.