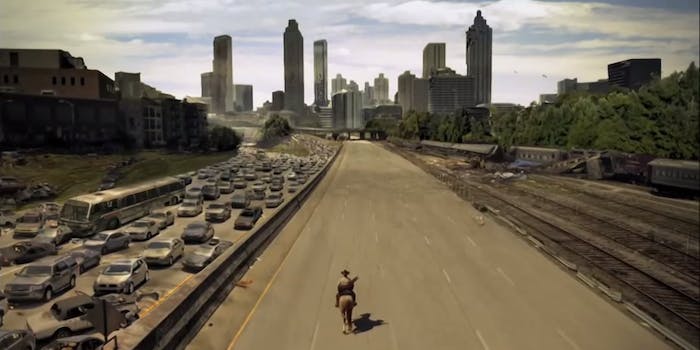 That ‘Walking Dead’ spinoff finally has a title

The series' producer announced the title on Twitter, hub of the post-apocalypse.

Earlier this month fans of The Walking Dead got details of AMC’s plans to launch a spinoff of its hit series. Executive producer Robert Kirkman announced on Friday that the new spinoff, which will follow a band of post-apocalypse survivors in Los Angeles, has a name.

Fear the Walking Dead? Sounds simple. If there’s anything the mega-hit has proven, it’s that it doesn’t take much to bring the horde—of fans, that is.

Still, among the many fans who will most likely watch the spinoff no matter what it’s called, there were plenty who were quick to eyeroll at the anticlimactic choice.

@RobertKirkman You had one job… wtf? Now you should fear the Walking Dead Fans' wrath #FearTheWalkingDead

In fact, the more I say the title, the worse it gets. #FearTheWalkingDead

Though the title has been floating around in association with the production for months, it was initially thought to be just the title of the pilot, not the name of the show itself. Still, fans just hearing the news for the first time tended to be unimpressed, confused, and underwhelmed, to name just a few of the many reactions that boiled down to “meh.”

Despite the backlash, the series’ producers probably aren’t worried too much. After all, The Walking Dead was single-handedly responsible for the network more than doubling its final quarter profit between 2014 and the previous year, from $35.4 million to $77.6 million.

With numbers like those, AMC can afford to be a little lazy on the title of what’s sure to be its next hit.