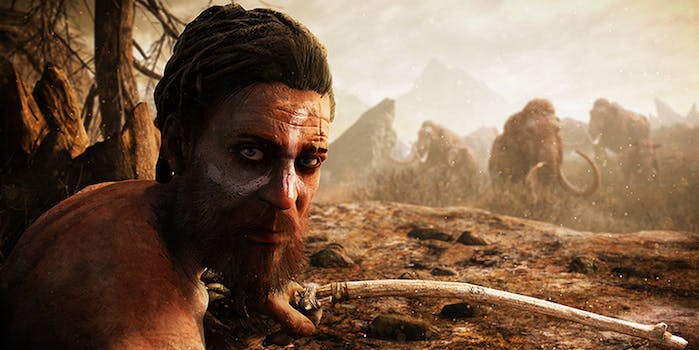 Ubisoft announces the next entry in the Far Cry series

Ubisoft announced the next entry in the Far Cry series, Primal, on Tuesday.

Set in 10,000 B.C., players will take the role of Takkar, a hunter who is “the sole survivor of an ambush on his hunting group.” It takes place in the “untamed land of Oros,” and Takkar must survive through a treacherous wilderness, fighting mammoths and sabertooth tigers to reunite with his tribe.

Unlike past Far Cry games, the conveniences of the modern world will be absent. That means no cars, planes, gyrocopters, and money. Weapons must be built and crafted. According to a behind the scenes video, the developers had a lot of gray area to interpret the world of Far Cry Primal; there’s only so much evidence that remains of people from that time period.

We wonder if some of the zaniness of Far Cry will be lost with Primal. Past games were like a sandbox, giving the players a large assortment of toys. It must be noted that Primal isn’t a numbered game in the Far Cry series, so this very well could be a spinoff. Granted, neither of the numbered Far Cry games link together, barring some recurring support characters.

Far Cry Primal is set to launch Feb. 23 on PlayStation 4 and Xbox One with a PC release in March.