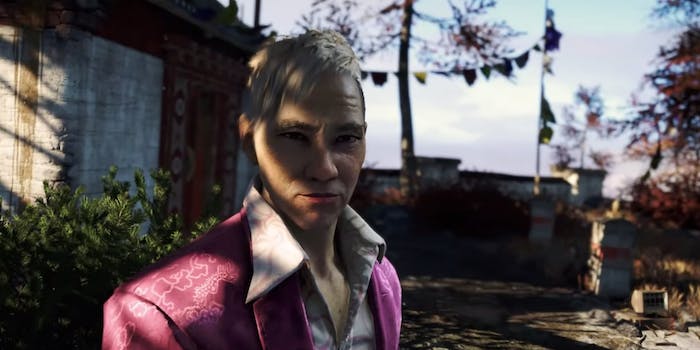 It can be over before it even really started.

True freedom in a first-person shooter is the ability to do whatever you want, right? Even if that means ending the game in less than 15 minutes.

If you actually pay attention to the introduction for Far Cry 4 and do what your character might do were he a real person, you will trigger one possible ending to the game. It happens before the player has invested hours of time into the game, so it’s easy to experience and then begin again. It also represents, from a certain point of view, an ultimate expression of where this video game franchise has always tried to take its players.

The Far Cry series of first-person shooters are about the player’s freedom to go where they want and do what they want. When the player is presented with a problem, he or she has multiple ways to address it, usually through stealth or open confrontation, with a plethora of objects that can be interacted with to aid the player’s tactics.

In Far Cry 1 and Far Cry 2, the player depicted a soldier and a mercenary respectively, i.e. a person familiar with firearms. Far Cry 3 took a different turn and made the main character someone on vacation in the tropics who gets caught up with a lunatic and is forced to fight back. Far Cry 4 takes a similar track in that the main character, Ajay Ghale, is paying last respects to his mother by returning her ashes to the nation of Kyrat, in the Himalayas.

Ajay is accosted by a warlord named Pagan Min, who had a relationship with Ajay’s mother. Min brings Ajay and his guide back to a mountain fortress to have dinner. Before they begin eating, Min drags Ajay’s guide away for questioning, because the guide is a member of an organization called Golden Path, which is trying to overthrow Min.

As Min leaves, he tells Ajay to wait there and enjoy dinner. And this, ostensibly, is when the player would get up from the table and begin their Far Cry 4 adventure, killing people and blowing stuff up. But what if the player chooses to actually wait? It takes about 14 minutes to find out.

Min’s line, “Maybe now we can finally shoot some goddamn guns,” after Ajay has a chance to pay respect to his mother’s memory, could be a lead-in to Far Cry 4 playing out the way most players would approach it. Instead, the game ends. The player made the choice not to resist Min—and Far Cry 4 respects it.