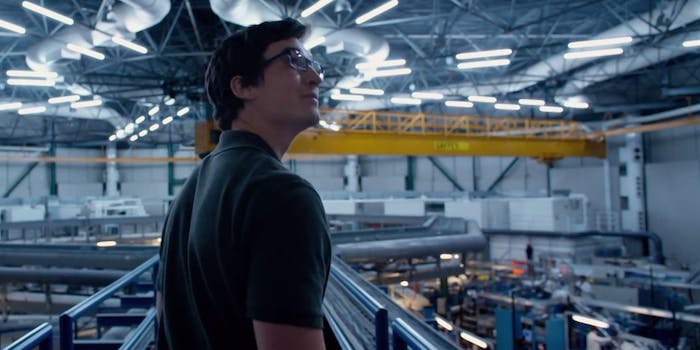 4 reasons why the new ‘Fantastic Four’ movie could be really, really weird

You remember how Doctor Doom is a hacker now? Well, there's more where that came from. A lot more.

The most surprising thing about the new Fantastic Four trailer is how normal it looks.

Why? Well, because up until now, most news from the Fantastic Four camp was decidedly… odd. Such as the suggestion that the movie would have a “found footage feel” (you know, like Blair Witch Project), and that one time someone claiming to be a 20th Century Fox employee went on Reddit to assure fans that it “isn’t a complete trainwreck.” From what we’ve heard so far, Fantastic Four has a good chance of being pretty weird. Just try to imagine the film that could spring up from elements like these:

Philip Glass is composing the soundtrack

The soundtrack for Fantastic Four is a joint effort between Marco Beltrami (who has mostly worked on horror movies like The Woman In Black), and Philip Glass, who is widely regarded to be one of the greatest composers alive today. Apparently all director Josh Trank had to do was send Glass a copy of his first film, Chronicle, and then give him a phone call with the job offer.

Trank’s only other movie is Chronicle, a dark and low-budget twist on the superhero genre. It went straight to No. 1 at the U.S. box office when Trank was only 27 years old, so hiring him to reboot Fantastic Four fits the recent trend of getting auteur directors (or at least, auteur-ish directors) to work on big-budget blockbusters. This worked well for Christopher Nolan’s Batman trilogy and with Marvel’s Thor and Guardians of the Galaxy, but fell flat when Sony hired Marc Webb (500 Days of Summer) to direct The Amazing Spider-Man.

Basically, studios want a director who can add some substance to their superhero entertainment, but not too much substance, in case it scares away mainstream audiences. Trank is evidently a convincing prospect, since he’s also been brought in to direct one of the upcoming Star Wars spinoffs. However, he’s not exactly Michael Bay. No one really has any idea what his Fantastic Four will be like, because soundbites from the cast and crew often just consist of buzzwords like “dark,” “gritty,” and “intimate,” and virtually no official information was shared until the teaser trailer dropped this week.

The hope is that Trank’s involvement will lead to a superhero movie that stands out from its more formulaic competition, but it’s easy to see how things could go wrong—particularly because he’s going from a $12 million debut film to working on a huge franchise like Fantastic Four. Creatively, this film is a mystery. Which brings us to…

Trank says one of his primary influences for this film is David Cronenberg, the godfather of body horror. If you think about the premise of the Fantastic Four origin story—four young people whose bodies are transformed to the extent that one of them is a walking rock and another can stretch like taffy—this does actually make sense. But you can’t deny that something like Cronenberg’s The Fly is pretty different in tone than the last Fantastic Four adaptations, which were simple, cartoonish, and starred Chris Evans and Jessica Alba in bright blue body suits.

Doctor Doom is a hacker

What, you think we’d forgotten? No. We could never forget the fact that Victor Von Doom, monarch of the imaginary European nation of Latveria, is now a 20-something hacker with the screenname “Doom.” Even compared to the Philip Glass thing and Trank’s Cronenbergian inspiration, Hacker Von Doom is still the strangest thing we’ve heard so far.