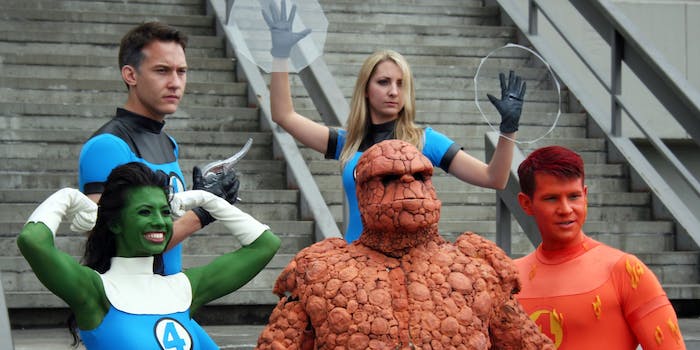 This is all very interesting, but can they confirm or deny whether Doctor Doom has a blog?

The synopsis for the Fantastic Four reboot is here, and it looks like they’re dropping some of the best-known parts of the team’s origin story.

Most significantly, this movie departs from idea that the Fantastic Four gained their superpowers during a space mission. Instead, the four main characters are transported to an alternate universe. Here’s the official synopsis from Fox:

“The Fantastic Four, a contemporary re-imagining of Marvel’s original and longest-running superhero team, centers on four young outsiders who teleport to an alternate and dangerous universe, which alters their physical form in shocking ways. Their lives irrevocably upended, the team must learn to harness their daunting new abilities and work together to save Earth from a former friend turned enemy.”

Comic Book Resources points out that this new plot summary bears some resemblance to a storyline from Ultimate Fantastic Four by Brian Michael Bendis and Mark Millar, but actress Kate Mara (Sue Storm) has previously suggested that the movie is not a direct adaptation of any comic book storyline.

Director Josh Trank (Chronicle) is thought to be taking the Fantastic Four in a grittier, more mature direction than the two movies of the mid-2000s. The “four young outsiders” description is an interesting touch, indicating that the superhero team won’t be the celebrated scientists they are in most previous versions of their origin story. Interviews with the lead actors imply the movie will focus more on their emotional journey, with Michael B. Jordan (Johnny Storm) characterizing it as a story about “a bunch of kids that had an accident” and have to cope with the resulting “disabilities.”

Sadly, the new synopsis doesn’t mention one of the biggest changes in the reboot: Doctor Doom. Supervillain Victor Von Doom is typically portrayed as an evil genius who rules the fictional European country Latveria. But according Fantastic Four actor Toby Kebbell, the rebooted version of the character will be a computer programmer who uses the screenname “Doom” online. Since Kebbell is the same age as the rest of the main cast, it’s possible that Doom is actually the “friend turned enemy” mentioned in this plot summary, which would explain why he has a more down-to-Earth origin story than the Doom we know from the comics.