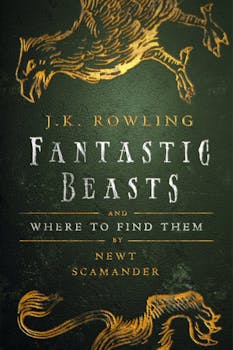 J.K. Rowling has an updated ‘Fantastic Beasts’ book on the way

Newt's ready to give the book an update.

The Fantastic Beasts and Where to Find Them book is full of magical creatures of all shapes and sizes, but like any good fictional textbook it’s ready for an update.

Pottermore announced Thursday alongside Scholastic and Bloomsbury (the U.S. and U.K. publishers of the Harry Potter books, respectively) that J.K. Rowling will be releasing a new version of Fantastic Beasts this year. Fantastic Beasts will come with new covers for the U.S., U.K., and ebook editions that will be released simultaneously, a new forward from Newt Scamander (written by Rowling), line illustrations by Tomislav Tomic, and new entries on six new magical creatures.

This collectible hardback has been revised & updated by J.K. Rowling, bringing the original classic book up to date: https://t.co/r812JIiOWD pic.twitter.com/uPKdxtDghy

The new edition of Fantastic Beasts and Where To Find Them will feature a foreword by Newt & six new beasts! More: https://t.co/VOW5DWRgzF pic.twitter.com/2S182oVa9B

The new edition of Fantastic Beasts and Where To Find Them will feature a foreword by Newt and six new beasts! https://t.co/6ENab9rwGo pic.twitter.com/0RfNH2mT9V

“[L]ike any diligent author, J.K. Rowling has revisited the original text to bring it in line with recent developments in the Wizarding World,” Pottermore said of the new edition. “We won’t ruin the surprise of which beasts these will be, but let’s just say there may be a few familiar faces. Or snouts. Or beaks.”

Fantastic Beasts was originally published in 2001, and the new edition allows Rowling to incorporate new creatures she created for the movie as well as letting Newt potentially mention some of the film’s events. His biography to this point doesn’t mention his role in the events that transpired in New York, for instance.

Proceeds from Fantastic Beasts will go to the major U.K. charity Comic Relief and Lumos, Rowling’s own charity. Fans can also purchase the book in a boxed set with Quidditch Through the Ages and The Tales of Beedle the Bard.

And while Rowling hasn’t said which beasts have been added to the new edition of Fantastic Beasts, she’s confirmed at least one new magical entity from the movie that won’t make an appearance.

An Obscurus isn't a creature… https://t.co/O3bsc4ObZ5

Fantastic Beasts will be released on March 14.