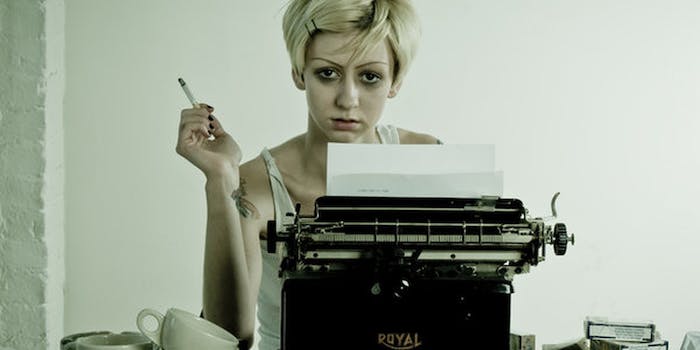 In the world of online fandom, it’s that time again: nominations week for Yuletide, the Internet’s biggest fanfiction gift exchange.

In the world of online fandom, it’s that time again: nominations week for Yuletide, the Internet’s biggest fanfiction gift exchange.

The purpose of Yuletide is to showcase fandoms that are too obscure to receive much attention from fanfic writers. Sure, you can find some decent Star Trek fanfic any old time, but if you want to read a story about that weirdly incestuous Folgers coffee commercial? You’re out of luck unless it’s December 25.

During Yuletide, writers nominate fandoms to read or write about, and are then matched up with a Secret Santa partner so everyone gets a made-to-measure fanfic gift on Christmas Day. At its simplest, the only qualifications required for Yuletide are that your chosen fandoms are “small,” and that you produce at least 1,000 words. Unfortunately, “simple” is not a word that’s often used in conjunction with Yuletide’s infamously complicated set of rules.

Made the mistake of trying to understand the Yuletide rules again. I think you’re meant to read them through a shot glass or a bird skull.

One of the most confusing aspects of the Yuletide process is working out just which fandoms are eligible to be nominated. For example, while there is already a list of fandoms that are definitely too popular to be included, you can’t nominate anything that already has more than 250 complete stories published on Archive of Our Own (AO3), or more than 1,000 on Fanfiction.net. However, it’s possible to sneak in “popular” characters such as Sherlock Holmes or one of the X-Men, if they’re specified as belonging to a more obscure spinoff fandom such as Sherlock Holmes in the 22nd Century, or a canonically independent comic series that rarely receives much fanfic attention.

We mention Sherlock Holmes specifically, because the nebulous mass of interconnected Holmes fandoms is always a point of contention. Last year, modern Holmes TV series Elementary was one of the most popular Yuletide fandoms, while this year it appears to be ineligible. But while some people believe that under the new rules, Elementary has somehow been pushed out of eligibility by the popularity of Sherlock, it’s actually ineligible due to the simple fact that there are now more than 250 completed Elementary fics on AO3.

Still, poorly explained new rules and a changeover in Yuletide’s management have led to some people losing faith in the gift exchange. The most unpopular announcement so far was the decision to implement a “two nominations” rule, meaning that each fandom would have to have at least two backers before it was accepted. Yuletide admins received so many complaints (you know, because many of the smaller fandoms were only ever going to receive one nomination) that they had to freeze comments on the announcement and make an abrupt U-turn back to the old system.

If all these rules are making your head spin, then you’re not the only one. As Twitter user @akafoxxcub put it, “sometimes i feel like reading the rules/regulations of yuletide is 1000000x more complicated/confusing than my econ book.” The bright(ish) side is that nobody ever really understands the Yuletide rules, so the new changes will not make much difference to the way most people play the game. Which is to say: Nominate something that isn’t on the list of ineligible fandoms, and vaguely hope that it won’t get rejected. And when in doubt, go for something ridiculously obscure, such as movies that don’t actually exist.

As for the nominations process itself, it starts on Sept. 16 and ends on Sept. 23. For an idea of the kind of things people have written about in the past, check out our fanfic recommendations list from last year. Weird new rules aside, most people on the #Yuletide tags seem as excited as ever to get going.

The only problem now is remembering that fandom you thought would be a good idea six months ago, but have now totally forgotten. Isn’t that always the way?