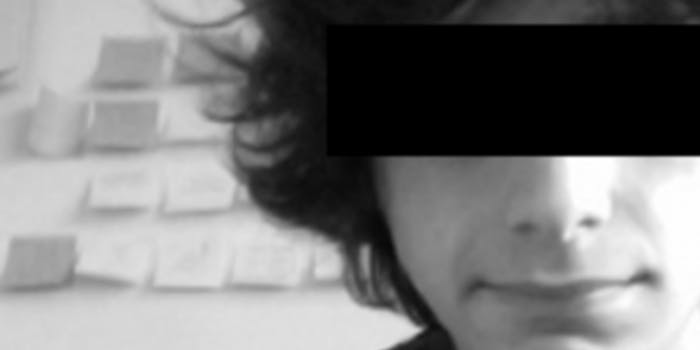 Tumblr is having a love affair with a Web developer

“The Xkit guy is my best friend and I don’t even know him.”

You’ll find a fan base for just about everything on Tumblr—including, apparently, one of the community’s favorite Web developers. Meet XKit Guy.

If you’ve ever tried to use Tumblr, you know that it comes with a learning curve. There’s also a lot that you can’t do easily, like, oh, see replies to things. Various third-party extensions have come along, most notably Missing E, an extension that Tumblr resisted so much it wrote a special message imploring people not to use it. But after Missing E, like a glorious but modest Caesar refusing the crown all the way to the Capitol steps, came XKit.

XKit is an open-source extension that lets its users create numerous third-party extensions for nearly every aspect of the site. Think Greasemonkey, if Greasemonkey were run by a considerate dude who helpfully updates like a fiend, dots the extensions with hints of personality, and delivers occasionally snarky public service announcements.

XKit is run by one man—Istanbul developer Atesh Yurdakul, better known to all of Tumblr as “XKit Guy.” He’s delighted users with his festive holiday touches and snarky extension notifiers; sometimes he even fights spam.

Combine all this with the “plucky underdog” mien that third-party Tumblr app-makers inevitably wear, and it’s no surprise that Tumblr users like the guy: 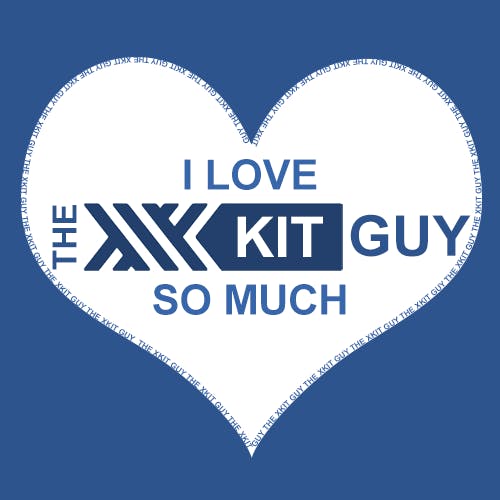 Tumblr has evolved a cult of worship for Yurdakul, a mini-XKit fandom. 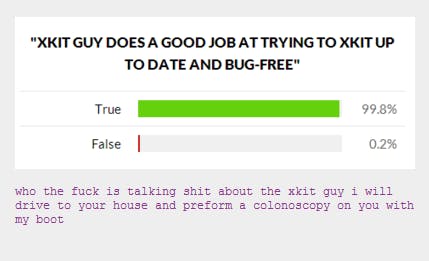 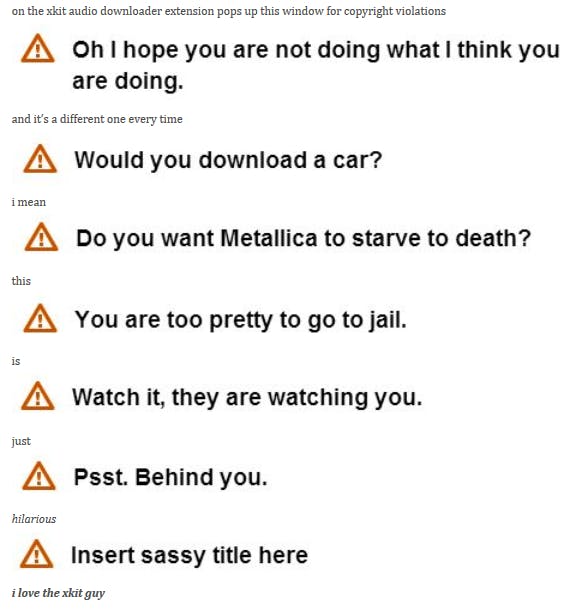 The two posts above garnered, respectively, nearly 10,000 notes in August and nearly 50,000 notes since late November—a mark of XKit’s growing popularity among users who’ve realized what a lifesaver the extension is. Most people’s reaction to discovering the extensive functionality of XKit is a feeling of incredulous relief:

“i just got xkit and let me tell you that i have never loved anything about tumblr more than this,” enthuses fruitcarnivore.

“The Xkit guy is my best friend and I don’t even know him,” gushes certifiedcuddler.

Then there’s croowley, who: “*aggresivly [sic] kisses xkit guy in the rain*”

When XKit Guy’s not raking in the love, he’s dutifully updating his extensions. Two days ago, when a recent Tumblr update left users with glitches and the inability to display GIFs in posts, XKit Guy informed users what the problem was, and then fixed it with a new extension that lets people simply ignore the new update. A post encouraging people to thank him and donate to his open-source contribution tip jar quickly racked up 13,000 notes, prompting him to post an overwhelmed thank you to his users:

I woke up today to an inbox full of the nicest messages possible, and my PayPal account accumulating more than ~3 months worth of donations in less than 24 hours. I’ve tracked a few posts which I think are responsible for this and let me say that just knowing that XKit made people’s blogging experience a bit better makes me happier than you can imagine.

But not everyone was totally happy with him. Members of Tumblr’s social justice community allegedly decided that due to previous posts on Yurdakul’s private Tumblr, he was xenophobic and even racist. The uproar, which apparently reached a climax in tandem with yesterday’s swell in donations, prompted him to make a post to clarify that he wasn’t racist; rather, he, himself, was the minority in question:

I am a member of that race. Those remarks are not one of a xenophobic person spewing racial hatred, it’s just me complaining about some stuff happening in my country. It’s no different than, let’s say, an American, posting “ugh I hate Americans” on their blog after an anti-abortion, anti-gay rights, etc law just passed in their state. …

I really appreciate the intention of those who were trying to spread this, I would not like to send donations / make promotions to a person who is a racist either, but as you know, once you tarnish a name, it takes a long, long time to fix that, so I ask everyone to do a little research before labeling anyone. Research never hurts anyone. Rumors do.

His post promptly gained support. “[W]hat kind of dystopian nightmare world do we live in where people think it’s okay to be dicks to the xkit guy,” opined petrahanges.

“We must protect the xkit guy at all costs,” intoned swagcasta.

Given Tumblr’s historic reluctance to play with third-party apps, it may be easier to protect the XKit Guy from Tumblr users than to protect XKit from Tumblr itself. The most recent update required Yurdakul to churn out updates for eight of his many extensions. But for all the work he’s done, he doesn’t seem to mind.

Tumblr may run on XKit, but XKit apparently runs on Tumblr’s love.