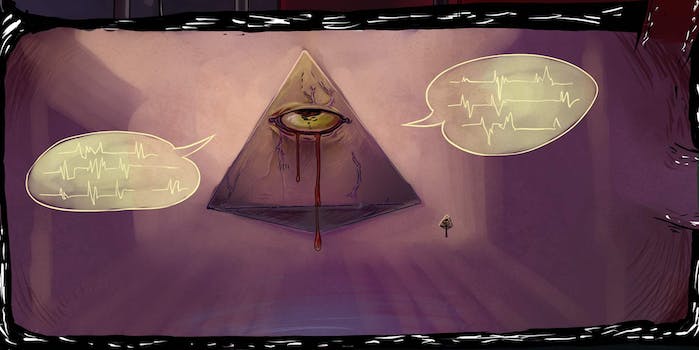 Are these the first-ever "fanscripts?"

Are you a fan of a show that takes place in an unconventional medium? Don’t let that hold you back from making it your own. That’s what dozens of fans of Welcome to Night Vale are doing, producing what may be the world’s first “fanscripts”—fan-created transcripts of America’s most popular podcast.

The medium is just one of the many unique things about Welcome to Night Vale, the unexpectedly popular podcast that, despite being a year old, sprang out of nowhere in June to quickly amass a huge fan following and bump This American Life off the #1 spot on iTunes. You might say that Night Vale, indeed, is about This Surreal American Life, offering to its cerebral and pop-saturated listeners a kind of inverse narrative about Americana. Night Vale, a small town where the strange and normal exist in inverse proportion to one another, is not your parents’ podcast.

But it’s still a podcast.  At no time in recent memory has a podcast, of all things, been the medium around which tens of thousands of zealotous fans blossomed, much less fans who’ve churned out fanart, gifsets, photosets, headcanons, fanfiction, and even cosplay.

It makes sense, however, that so much of the stuff fans have created for this weird and wonderful podcast series has been visual. Fandom is primarily a literary and a visual medium, and any story as quirky as Night Vale’s will attract all kinds of fanartists, because making quirky art is always fun.

But up until now, the Night Vale fandom hasn’t generated much of a literary side. That could be because Tumblr encourages fans to spend time creating Tumblr-friendly fanwork, and while Tumblr loves images, it’s not the best place to put words. But even on what seems to be the Night Vale fandom archive of choice, AO3, there are only a few hundred fics—hardly the output you’d expect from a fandom that regularly generates fanart with tens of thousands of notes.

Perhaps the difference is that Night Vale, itself, isn’t a literary medium. The fact that it’s a podcast has been the main hurdle for many fans to overcome before they decide to mainline its 28 episodes, each around 20 minutes long. While this is roughly equivalent to just a season and a half of Community, it seems the truth, as every podfic fan can tell you, may be that many fans just aren’t used to listening to stories.

So for all you lucky people who like to read the narratives you consume, Night Vale fans have decided to bring the party to you. Fans have started to create transcripts—which we’re going to call “fanscripts,” in the spirit of fansubs, fandubs, and fanlations. Currently fan-created transcripts exist for all but the most recent episode.

Is this the boost fandom needs to take Night Vale to an even wider audience? Or is this just the latest evolution in the long tradition of fans getting creative and making their canons more accessible? Fandubs, scanlations, and fansubs are all about crossing the barrier of language, but the spirit is still the same:

If you build it—or in this case, transcribe it—they will come.

Unless what you’re building is the Night Vale Dog Park. But we aren’t allowed to talk about that.