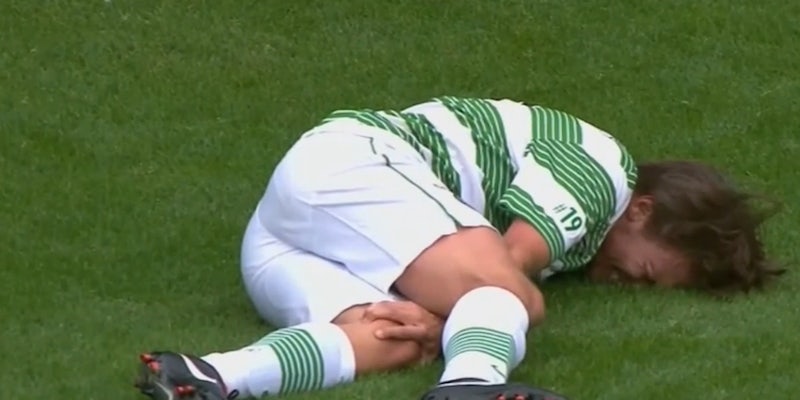 This is what happens when 173 pounds of professional athlete hurtles into one fifth of a boy band:

It was a routine soccer tackle: Gabriel Agbonlahor, imposing striker for Aston Villa in the English Premier League, raced in to win the ball, cleanly taking it away but flooring his opponent in the process.

However, that opponent was actually One Direction‘s Louis Tomlinson, not another professional. The result was one badly damaged knee—and outraged hordes of One Direction fans, who sent death threats to Agbonlahor over Twitter.

It all happened for a good cause. The pair were facing off at a charity game in honor of Stiliyan Petrov, a former Celtic and Aston Villa player forced to retire due to leukaemia. Tomlinson, playing for Celtic for the day, collected the ball close to his team’s goal. Agbonlahor, who’s also an England international when he’s not playing for Villa, clattered into the back of Tomlinson’s knee as he kicked away the ball.

Tomlinson, who wore “1D” as his shirt number, dusted himself off, but limped off the field and vomited when he reached the sidelines.

Cue the ire of the One Direction fandom, many of whom promised revenge in violent, sometimes racist, tweets. 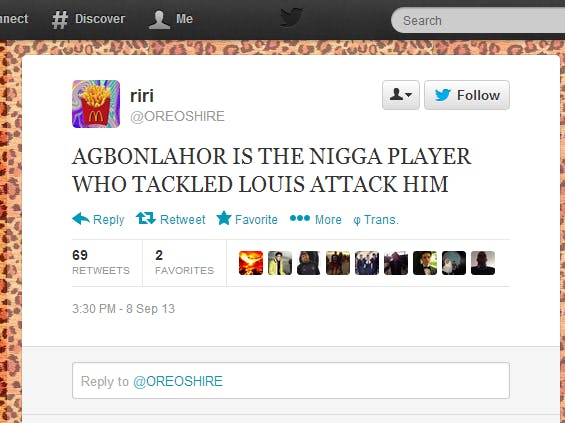 My whole timeline is full of pictures of Louis getting hurt. I’m going to kill that guy!!!!!!!! HOW DARE YOU HURT LOUIS?!

fuck off you @gabby_10, how could u touch my precious LOUIS? I WILL KILL U MUTHERFUCKER

@gabby_10 IF YOU FUCKING DARE TOUCH LOUIS AGAIN I WILL FUCKING KILL YOU. IN FACT? FORGET IT. KILL YOURSELF. NOBODY WOULD CARE.

@gabby_10 I should Fucking Kill You For Touching Lou U inbred Dick >.< u fucking bitch

@gabby_10 You obviously need Jesus. WE WILL FUCKING FIND YOU AND KILL YOU.

Ugh I want to kill this dude for touching ma man ? https://t.co/vYHouyWqfm

WHOEVER PUSHED LOUIS DOWN I WILL FIND YOU AND PUSH YOU OFF THE GODDAMN EMPIRE STATE BUILDING!

DON’T FUCKING TACKEL OUR TOMLINSON AND THINK IT’S OKAY. YOU ARE A DEAD MAN #GoodLuckForTheMatchLouis

Agbonlahor said he’d apologize to Tomlinson, who is scheduled to play for his hometown team in another charity game later this month if he’s fit. Meanwhile, it’s unlikely Agbonlahor saw the death threats. He doesn’t use Twitter.