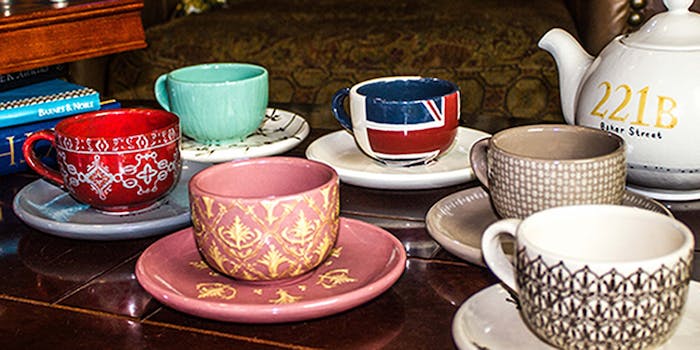 Tumblr is going crazy over these custom teapots

One lump or two?

“Why don’t we make teapots?”

That’s how two sisters found themselves on a strange and wonderful journey to the creation of the coolest fandom spinoff product you’re likely to see this year: the fandom teapot. 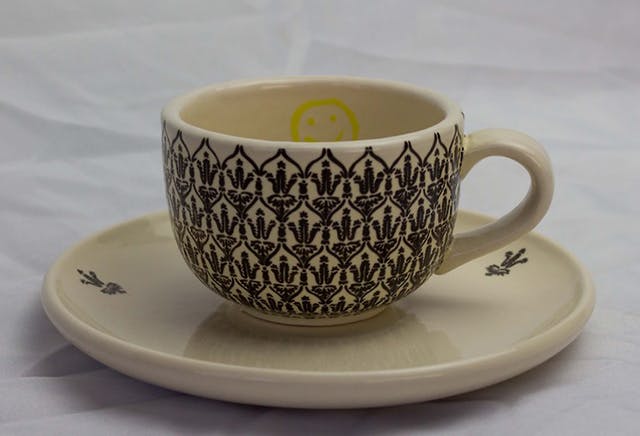 Eighteen months ago, Aubree Stephens and Ashley Lindsted decided to become wizards of the kiln. Or rather, Ashley did after Aubree voiced the desire to make a teapot while “half asleep.”

“I think she was joking,” Ashley told me via email, “but I loved the idea. She may have thought I was crazy for a while.”

There was just a little problem: they had utterly no experience. They’d never so much as molded a clay jar or glazed an urn. Oh, and they didn’t have a kiln, either. 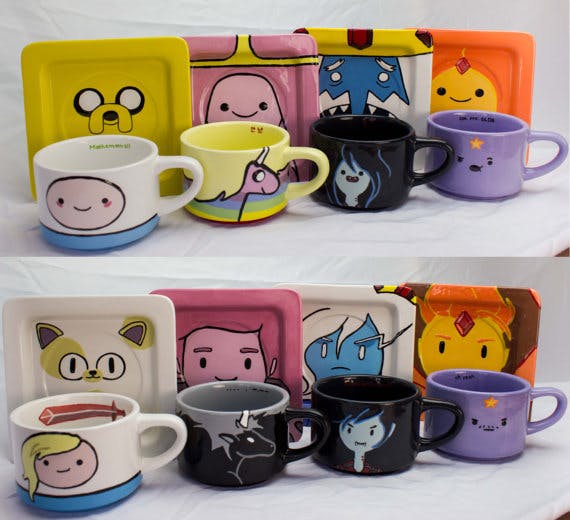 But the sisters, who live in the picturesque Southern California town of Cherry Valley (population 6,362), didn’t let lack of resources stop them. They lucked out with a nearby estate sale where they bought a kiln for just $40. From there, they dove in.

“We started working on teapots about a year ago, we have just recently perfected the art,” Aubree said. “It was a trial and error basis to start with, and we have lost a lot of beloved pieces because of stupid mistakes.”

“It took us a LONG time to figure out how to work everything properly,” Ashley added.

“There is a delicate balance between cleaning, painting, glazing, and firing and we kept messing up one thing or another. The glazing, especially, is a nightmare if done incorrectly. So we would spends hours or days painting something, only to have the glazing blob or leave a hole and ruin the whole thing.”

The two women discovered that form followed function, and that the shape of the ceramic item influenced the design.

“Certain fandoms work really well with certain pieces,” Aubree said. They also struggled with getting the coloring right—it turns out paint that looks pastel before going into the kiln turns out looking a bit different.

“One of our first bottle buddies was nicknamed Zombie John (from Sherlock),” Ashley said, “because the coloring was so bad. It was nearly a year before we put anything into our shop because it took us that long to create something that was usable.” 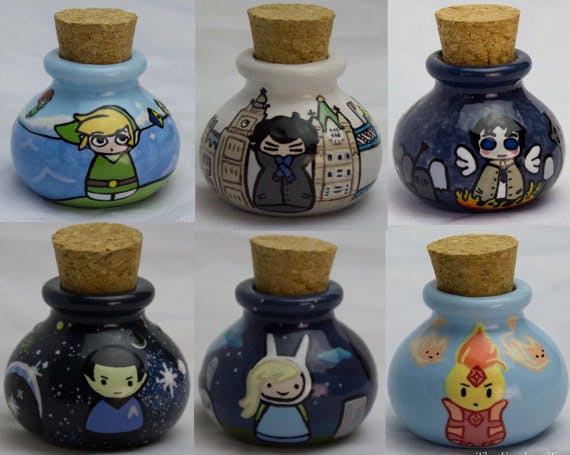 But create they did, and now they’re generating interest from fans around the Web for their cheerful, unconventional designs. Prices in their Etsy store range from $15 for a light switch plate to $150 for four cup and saucer sets.

“Fandom tea” has been a popular niche for a while now. Online tea blend-maker Adagio got a huge boost from fandom after Tumblr denizens began making and buying teas devoted to their fandoms. The retail shop gradually overhauled its business after it realized how popular fandom-related blends were, tailoring itself to fandom culture and even offering discounts if you “ship” teas together by pairing two compatible blends. In the process, the artists behind the teas became popular, and tea itself became something of a fandom.

The sisters turned to Adagio’s many fandom blends when I asked them to recommend their current favorite sets and a tea to go in it: 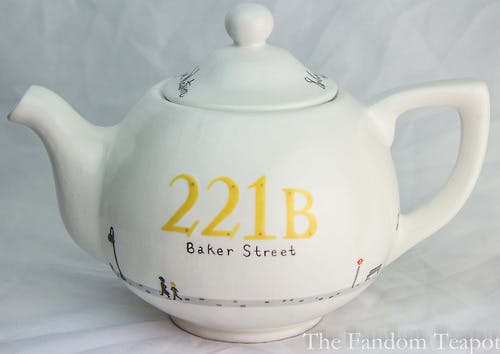 The Tea Set: Our 221B Baker Street Set, because of the sheer amount of love, time, and effort put into it.

The Tea: For this set, we’d recommend Mind & Heart by Cara McGee, or Chibilock’s Adventure by Robin Senica. 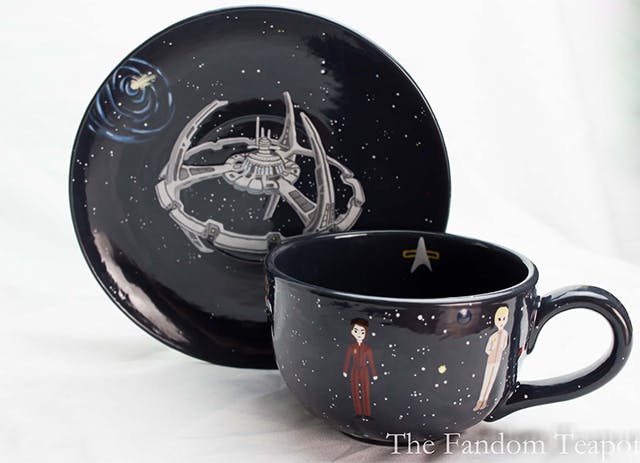 The Tea Set: The second one would have to be our DS9 Latte cup set.

The Tea: For this cup and saucer duo, we recommend Cardassian Ale by Sean Bennet. 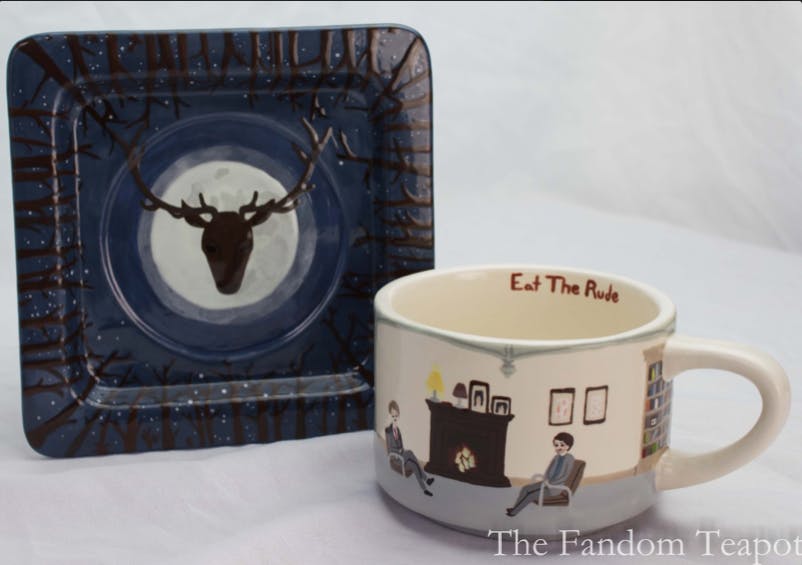 The Tea Set: Third is Hannibal.

The Tea: For this set we recommend Hannibal by Aun-Juli Riddle

If you’re new to drinking tea, the sisters have some suggestions.

“For newbies we suggest you follow the given timelines so you can taste [the teas] how they are meant to be, and then see if you prefer more or less. For me (Aubree) I love my herbal teas WAY oversteeped, whereas Ashley hates herbal tea, and likes her white teas steeped for so short a time you can hardly tell it’s been done. One important detail is to always try a tea plain first, and add creamer and sugar once you have discerned the flavor.”

The tea sets have garnered a “really positive response from fandom so far,” Aubree tells me. Clearly it’s the perfect time for fandom-themed tea sets and teapots. The sisters, who have loved tea since they were children, got into fandom much later, after a friend made them watch the hugely popular anime Hetalia, then introduced them to the world of fanart for the series on deviantART. They fell deeper into fandom and eventually into Tumblr. When they started to design tea set patterns fandom was always in the forefront of their minds.

When designing their tea sets, they draw from core fandom images, as well as phrases and patterns that have meaning to them. “It’s our goal to make something that we would want ourselves,” Ashley said. Aubree adds that one of the hardest decisions they face is whether or not to use characters or patterns. “We find that a lot of people (especially on Tumblr) enjoy the opportunity to give us input on designs, which is great for us! We love to hear what people think.”

Right now, their most enthusiastic fandom is probably Sherlock—hardly a surprise since fans can’t seem to get enough of that wallpaper, which has shown up everywhere from throw pillows to leggings. They’re also planning to expand their designs to include zodiac signs, the solar system, and more.

With all this work, it comes as a shock to remember this is all just a hobby. How do they make it all work in their spare time?

Photo via The Fandom Teapot