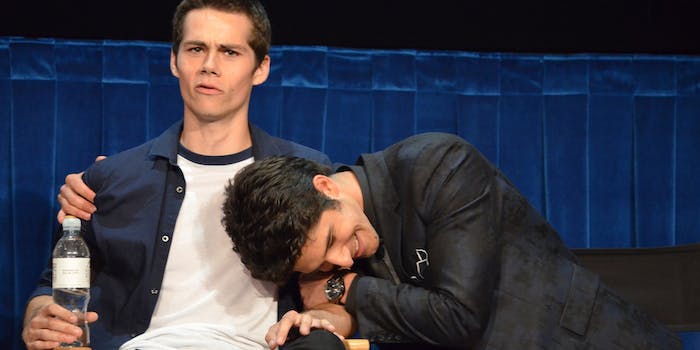 Note to stars of shows with popular fandoms: This never ends well.

Tyler Posey, the lead actor for the beloved fandom favorite Teen Wolf, has volunteered his thoughts about Sterek, slash fandom’s name for the extremely popular pairing of main characters Stiles and Derek. And they aren’t pretty.

In an on-camera interview released today with Hollywood Life, Posey minces no words about his feelings for the pairing, which has dominated fandom communities like Tumblr and the Archive of Our Own since the show began in 2011:

I think Sterek is a bizarre, weird, twisted thing, and I think that anyone who pays more attention to Sterek than the show, um, isn’t watching the show for the right reasons.

In a word, ouch. The Sterek discussion begins at 1:29, when the interviewer asks the group of Teen Wolf actors how they feel about the possibility of the pairing becoming a reality on the show.

The video quickly spread around Tumblr as fans reacted to Posey’s statement with bitterness. But while reactions ranged from outrage to sadness, few fans declared they only watched for Sterek; in fact, most fans protested just the opposite, with many affirming their love for Posey even as they voiced their own hurt.

It’s tempting to wonder what he was thinking. Actors bashing ships never, ever ends well. But Posey’s reaction is understandable. After all, while his character Scott is the titular Teen Wolf, the show’s break-out star is unmistakably Dylan O’Brien, who plays Scott’s best friend Stiles on the show. With a starring role in September’s Maze Runner, O’Brien is poised to transition easily to a major film career once Teen Wolf is done. The creative team clearly knows what it’s got in O’Brien: its midseason marketing heavily promoted him, and the back-half of the season is currently focused on his character arc.

On top of O’Brien’s popularity, there’s Sterek—a phenomenon which focuses on two characters who don’t have a lot of onscreen interaction. That’s got to be at least a little annoying for Posey, who’s faced with the possibility that much of the show’s success may be due to fans latching onto something he thinks isn’t there.

It’s true that recently the show may have dropped a hint that Stiles is bisexual; but while many shippers saw the moment as a baby step along the path to making Sterek happen, it wouldn’t be the first time a show has teased a popular slash pairing that never came to fruition.

But this isn’t just any slash pairing.

Ironically, fans had seen Sterek as a welcome change from the usual dismissal that slash fans usually get from their creative teams. Sterek is something of a historical first in a lot of ways, purely because Teen Wolf creator Jeff Davis was so welcoming and supportive of the idea. Creators have a long history of viewing slash fans as weird, obsessive, creepy, or crazy. Davis saw them as passionate, creative, and loyal. With his blessing, the show embraced Sterek in numerous ways. O’Brien and Hoechlin filmed promos for the Teen Choice Awards together; MTV’s unprecedented Teen Wolf fanfic contest welcomed Sterek and other slash pairings. And in turn, the Sterek fandom rallied around Davis, creating a “campaign” to show love for the pairing and the show.

Still, it’s never easy for us to hear that someone that fans love and respect thinks their pastime is weird. Posey’s language is the kind that has long been used to keep fans, particularly female, slash-loving, fanfic-writing fans, ever on the outskirts of mainstream culture. To quote darain39: “can we pls shut down the biggest ship in our fandom if we have to with words other than “TWISTED AND BIZARRE”???” 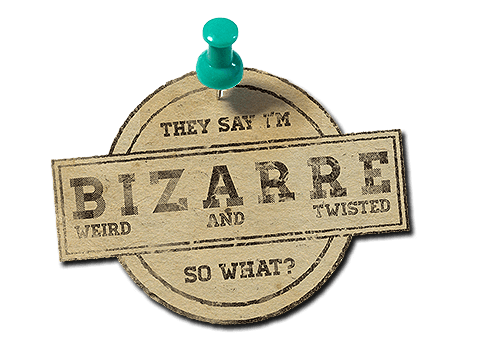 The Tumblr bizarre-weird-twistedthing was apparently created after the dustup specifically to ask the following:

I don’t care that Tyler said that watching Teen Wolf for Sterek is wrong. There is so much more to the show, and I’ve never watched it for a ship that I’ve always known would probably never be canon. What bothers me is the way he had to shame shippers beforehand. Sterek is a bizarre, weird, twisted thing, Posey? Then what am I for shipping it? What am I for loving it and wishing that it would happen on the show? Even while acknowledging that there’s probably no hope for it ever happening? Am I bizarre? Am I weird? Or am I just a twisted thing?

It’s been a turbulent season for Sterek fans. After Posey’s outburst, Hoechlin gave the diplomatic follow-up that Sterek has “taken on a life of its own,” but that he sees Stiles and Derek’s relationship as one of “partners in crime.” He predicted that the rest of this season would find Derek showing increased “concern” for Stiles as events drawn them closer together.

But even if recent on-show developments undermine Posey’s opinion, the fandom will probably be smarting from his words for a while. Posey may have been referring just to Sterek’s romantic potential; he’s been supportive of other slash ships on the show before. And Teen Wolf itself is a progressive show: Davis is openly gay, and so far, two characters have been in queer relationships.

Still, it’s hard for fans who are used to being mocked for slash to separate Posey’s description from a dismissal of slash itself—which is only offensive if you think fans wanting gay relationships to happen is twisted and bizarre. That’s a little harder to take than just regular old ship-bashing.

For many slashers, the hope that Teen Wolf will make Sterek happen in canon is probably part of the pairing’s appeal. Getting to see a beloved slash pairing happen on the show itself would be a refreshing change from the status quo, where slash is seen as something quirky and easy to laugh off.

But while it’s easy to see Sterek fans as “slashtivists” for a cause that will never happen, it’s not easy to watch fans get hurt because of what they love.

Here’s hoping Teen Wolf makes it up to them, whether Sterek becomes canon or not.