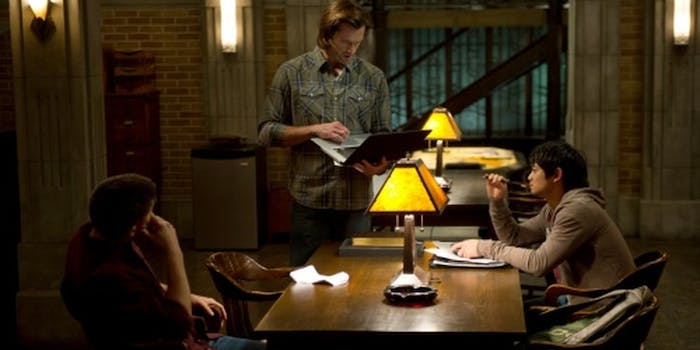 To celebrate his character's birthday, actor Osric Chau posted his very own fanfic to his Facebook page last night.

What do you get the character who has everything for his birthday? Fanfic, of course!

OK, so Osric Chau’s character on Supernatural, Kevin Tran, lost his entire life a season and a half ago, and now he’s a wandering prophet hiding out in a bunker with the Winchester brothers and a rogue lord of hell who may or may not have killed his mom. But hey, on your birthday, everyone gets to celebrate, right?

Last night Chau posted his very own fanfic to his Facebook page:

Today is Kevin’s Birthday. He didn’t go to Princeton or get a high school diploma. He never made it to senior prom or ever knew the butterflies in your stomach when you see your date in a dress for the first time. And he never got to know his dad, or say goodbye to his mom..

On this 20th birthday, he also didn’t get any power ranger powers. Professor Oak did not call and ask him which starter Pokemon he’d like. Instead Dean brings out an apple pie from the kitchen while Sam hurries to put in a candle and light it before Kevin notices the smell.

We’ve seen actors who’ve admitted to reading fanfic and being delighted by fanart, and actors like Orlando Jones who openly ship characters on their own shows (and other shows). But this has to be a first for us. Chau’s fanfic, though short, seems like it would fit right in on the show—at least at first. It’s even got an in-character cameo from Kevin’s nemesis, the demon Crowley, who shows up to recap some tidbits from their interaction over the last two seasons:

And then a deep roar in perfect pitch comes out from the basement, “HAPPY BIRTHDAY TO YOUUUU!”

They all look towards the stairs with the ‘was that Crowley?’ look.

Way to be canonical, Osric! Except then, in typical Supernatural fashion, everything goes totally off the rails:

..then ALL OF A SUDDEN RADIOACTIVE OOZE SPLASHES ALL OVER HIM! Sam and Dean look up, there was an unseen tub of waste above Kevin’s seat in the library. Oh no, Kevin’s mutating. Oh yes, Kevin’s now a turtle.

Welp. So much for Chau’s double-duty as an Supernatural staff writer. (Though let’s face it, if he’d promise to make Destiel happen, fans would let him get away with anything.) 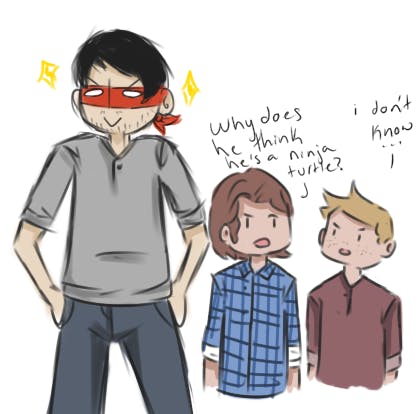 Though Chau has only been on Supernatural since late season 7, he’s become a fan favorite, regularly appearing at conventions and occasionally cosplaying as the other characters.