This might be the most controversial Tumblr username ever

Are you the prey? No, you’re the hunter—a Supernatural hunter by the name of Sam Winchester, that is. If only the owner of samwinchester on Tumblr would actually embrace their username, and post about… well, Sam Winchester.

Samwinchester, whose given name is Laura, doesn’t seem to care that her gangly, taller namesake (played by Jared Padalecki) and his brother Dean Winchester have catapulted their show to a nine-season run on the CW and an enormous, zealous fanbase.

No, all she cares about is the hit anime Attack on Titan. And man, is the Supernatural fandom ticked about it.

Look, snagging a username like samwinchester on Tumblr is a once-in-a-lifetime stroke of luck. But Laura, the fangirl behind the username, posts about everything except Sam Winchester. Her last post about Sam was more than two weeks ago. After rummaging back 15 pages on her Tumblr looking for a post about Supernatural, we gave up.

That explains why she’s been pelted with angry Tumblr messages. Apparently, one does not simply snag a name like samwinchester and then refuse to post about Sam Winchester.

Fortunately for the rest of us, and for an increasingly amused Tumblr audience, Laura gives no fucks: 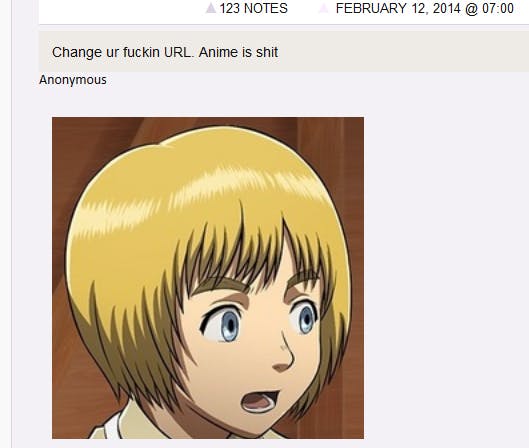 Is she the ultimate troll? Nah. She’s actually an SPN fan. She also just really loves Armin Arlert, who is perhaps the most tragic of Attack on Titan’s characters—if you can say that about anything in a show where people routinely get eaten.  Then again, Supernatural is hardly a walk in the park. It also has scary monsters, homoerotic male bonding, and an unusually large number of hot men per capita. Surely these two fandoms can get along?

Not quite. Because in addition to hoarding the name samwinchester, Laura is also a Dean/Castiel shipper, meaning she’s a fan of the imagined pairing of those two characters. This is apparently a cardinal sin among a large number of Sam fans, many of whom ship Supernatural’s other popular duo, Sam/Dean.

To be fair, the SPN fandom hasn’t had an easy time, what with their creative team apparently dedicated to infesting their show with homoerotic subtext and then never letting any of it pay off. It’s enough to make anyone a little incensed.

Photo via Wikimedia Commons (CC by SA 3.0) and  xshadow-lightx/deviantART (CC by ND 3.0)