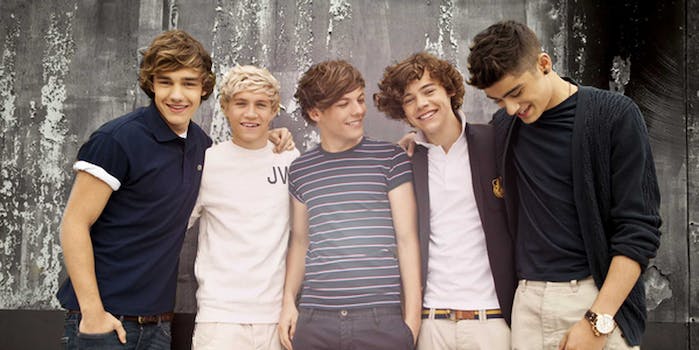 Suicide rumors spread after documentary about One Direction fandom

#RIPLarryShippers became a Twitter trending topic, but there have been no confirmed reports of 1D fans taking their own lives.

Crazy About One Direction. With a title like that, this British TV documentary about 1D fandom was unlikely to win much support among the fans themselves. Nobody likes to be called “crazy,” but the online reaction from fans of the popular boy band went far beyond what anyone might have expected.

Lets just share this candle in remembrance of our 14 angels we lost today #riplarryshippers pic.twitter.com/jurCZGdGlu

#RIPLarryShippers 14 That believed That got told to go die. Who died. Who still kept on believing.

“Larry shippers” are fans who believe that band members Louis Tomlinson and Harry Styles (“Larry Stylinson”) are in a relationship, and they make up a significant proportion of the band’s fanbase. There’s a lot of conflict between them and fans who support Louis Tomlinson’s relationship with his real-life girlfriend Eleanor, with both sides regularly accusing each other of cyberbullying.

Crazy About One Direction not only inspired anger from 1D fandom in general, but it also led to a new wave of hateful tweets and Tumblr messages directed at Larry shippers. The intensity of the hate mail received by Larry shippers on Twitter and Tumblr is part of the reason why so many fans found it plausible that multiple fans might have taken their own lives.

#RIPLarryShippers Were these tweets really worth a life. Please think before you speak. pic.twitter.com/MgWcoyIE8K

One Direction fandom is no stranger to unsubstantiated suicide rumors, which to spread in a pretty similar fashion each time. First, someone will tweet a number of “suicides” (in this case, 14), which will then be passed along via Twitter and Tumblr, occasionally developing into a trending hashtag—as we saw last night with #RIPLarryShippers. Last night’s number appears to originate from a tweet made on August 7:

Although this tweet refers to an unsubstantiated number of total suicides from previous rumors, the number 14 was somehow transferred to the new rumor regarding last night’s documentary. Soon, that number rose to 28, and then 42, with some fans even tweeting a death toll of over 90 people. Eventually even the TV channel that aired the documentary had to respond, although they were also unable to find any evidence that these suicide rumors were true.

Cyberbullying is rife in 1D fandom, and with a high-profile cyberbullying-related suicide currently making headlines in the U.K., the topic is not far from anyone’s mind. However, while 1D fans have had to deal with plenty of online harassment in the past, there’s no evidence of any fans ever killing themselves as a result of fandom flame wars. In fact, 1D fandom rallied in support of one suicidal teen last year, helping to save her life by calling 911 and contacting her family.

The startling thing about the #RIPLarryShippers hashtag is that vanishingly few fans are actually asking for evidence before retweeting the current number of suicides. Suicide and self harm are very serious issues, particularly in a high-risk community of teenage girls who regularly face cyberbullying in their online lives, but few seem concerned about discovering the real identities of the ever-growing number of fans mentioned in the “RIP” tweets.

After some investigation, we were only able to find the Twitter accounts of three fans who are alleged to have taken their own lives: @LovinLarry17, @larrystylincum_, and @harryisatwerk. But while none of these three fans have tweeted in the past twelve hours, there’s nothing to suggest that this isn’t a case of “pseuicide” (“killing” or deleting an online persona), a phenomenon that one sees fairly often in online fandom.

It may seem callous to say so, but if multiple One Direction fans had indeed taken their own lives as the result of a TV documentary, this would be front page news rather than a Twitter rumor. Suicide is a tragedy, and spreading false rumors like this is harmful, both to One Direction fandom and to people who are dealing with real suicidal thoughts themselves.

UPDATE: One of the Directioners rumored to have died, @lovinlarry17, is alive according to her Twitter account. A series of posts apparently from the user’s sister claim that she did attempt suicide, and is now recovering in the hospital. These tweets haven’t been independently confirmed.

Another alleged victim, @larrystylincum_, has also tweeted about surviving an attempt at suicide.

A third suspected suicide victim, @craichood, has begun tweeting again as well. Tweets from the account were signed by a friend claiming that the account’s owner had attempted suicide, but was recovering in the hospital. Again, none of the Twitter reports from survivors have been independently verified.