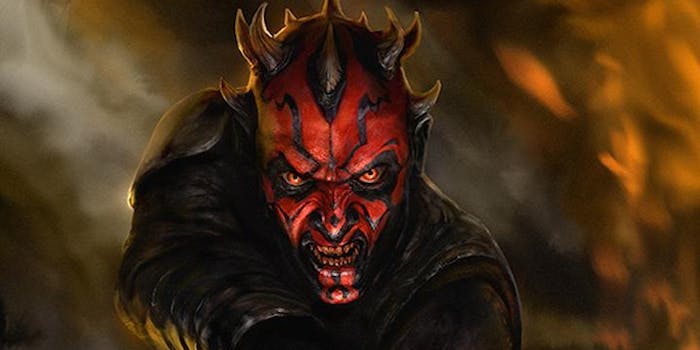 At least one ‘Star Wars: The Clone Wars’ character will get a proper finale

Dark Horse will release the end of Darth Maul's story in comic form.

Dark Horse Comics may be saying goodbye to its Star Wars license when Marvel takes over in 2015, but until it does, it’s going to make the most of the rights. This week Dark Horse announced the release of a new miniseries that will make fans of the Cartoon Network animated show Star Wars: The Clone Wars very happy.

The four-part series will wrap up Darth Maul’s storyline from The Clone Wars. Maul’s future, like many of the other characters’, was left hanging when Lucasfilm cancelled the 5-year-old show last year shortly after being acquired by Disney. Not long after, a Save the Clone Wars campaign was launched and it was clear fans were unhappy that they didn’t get to see the conclusion of many of the show’s storylines. Some were also put off by Disney moving on rather quickly to a new animated series for their own network, Disney XD, called Star Wars: Rebels.

The new comics will be adapted from show scripts that were never produced, written by Star Wars writer Jeremy Barlow.

“Due to the Star Wars: The Clone Wars TV show’s sudden cancelation, Lucasfilm wasn’t able to film the final episodes of the series, which is a shame because the story is an important—and action-packed—chapter in Darth Maul’s continuing evolution as envisioned by George Lucas,” Barlow told Newsarama. “Never ones to let a good story slip away, Dark Horse and the team at Lucasfilm saw an opportunity to save these teleplays from obsolescence and we’re adapting them into a four-part miniseries called Darth Maul: Son of Dathomir.”

While fans seemed happy with the news, there was some confusion at first about this being the intended finale for the series. Barlow and Lucasfilm employees took to Twitter to clear things up and even requested changes to misleading headlines.

The Maul comic is very cool, but it *wasn’t* the series finale. It was a 4-part arc that fell beyond what was already in production.

If there’s still confusion: the new Dark Horse miniseries only deals with a Darth Maul arc from near end of the series. Not a series finale!

@jamesjawa @BradKellerDA @DarkHorseComics I can’t speak to LF’s plans. This story feels like a Maul finale moreso than a total series ender.

Darth Maul: Son of Dathomir will be available in May.