Why ‘Sleepy Hollow’ is the fandom Tumblr needs right now

This new show has found a winning fandom formula.

The pilot episode for the new Sleepy Hollow TV series is, quite frankly, nuts. Created by two of the writers of the new Star Trek movies, it features George Washington battling the four horsemen of the apocalypse, and Ichabod Crane waking up in the 21st century as a reanimated Revolutionary War soldier. The whole “headless zombie axe-murderer” issue is framed like the introduction to a lighthearted buddy-cop show.

It’s also the new most popular thing on Tumblr.

Before the first episode of Sleepy Hollow had even aired, the show was already all over online fandom. GIFs, fan art, fanfic, the works. And here’s why. 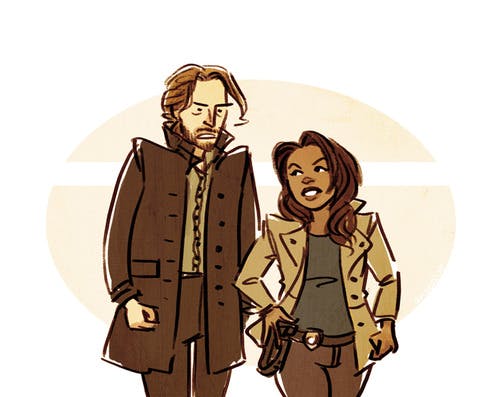 While Tumblr-based fandom is generally ruled by male-dominated TV shows and movies (usually with some homoerotic subtext that people can write slash fanfiction about, e.g. Sherlock or Star Trek), there’s also some backlash against this trend. A simple explanation can be found in this succinct, Tumblr-style takedown by coolghost:

“tv show. white man. hes sad. he has to do important thing but its hard. his girlfriend died probably. TWSIT!! theres another white man. maybe MORE. hes sad too but for different reason. its very deep probably. theyre best friends but not gay but maybe they are haha fandom!!! every girl dies or goes away. just not gay white man friend. 10 seasons 100 million viewers. what will moody white men do this week.”

Here, you have the formula for Suits, Sherlock, Supernatural, Smallville, and the entire buddy-cop genre. Tweak a couple of details and it also includes the Star Trek reboot, White Collar, Hannibal, and most minor-fandom slash pairings such as James Bond fandom’s 00Q. So for many, the recent popularity of Elementary, with its male/female partnership and Lucy Liu in the starring role of Sherlock Holmes’ Watson, was a breath of fresh air.

Sleepy Hollow, featuring a woman of color in the lead role, looks like it may be a new Elementary, with added elements of supernatural ridiculousness for the Teen Wolf/Grimm/Supernatural crowd.

As Tumblr user michelle-my-belle put it:

“My new favorite genre: WOC [women of color] and the obnoxious English men who grate on their nerves.”

Basically, Sleepy Hollow, like Pacific Rim earlier this year, is onto a winning formula because it combines cheesy genre tropes (time travel! ghosts! unlikely cop partnerships!) with the diverse cast that some audiences so desperately crave. Even the actors seem to agree:

@Writer1976 me too. Two Black people on the show and the white dude dies first. This #sleepyhollow is weird as hell.

At this point, the only thing that could make Sleepy Hollow more appealing is if the rumors of John Cho returning to the show turn out to be true.