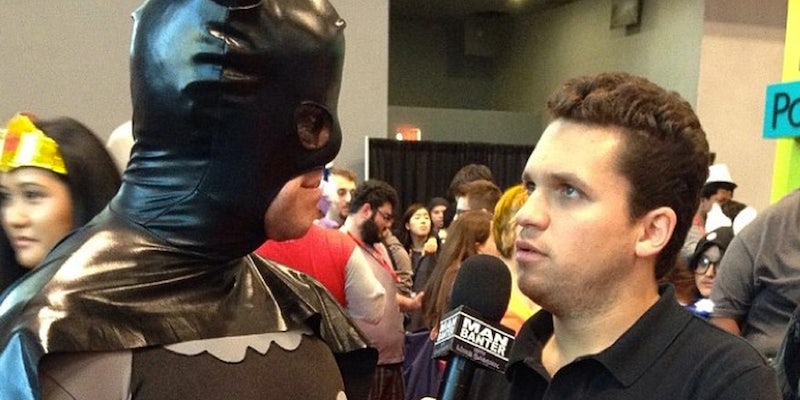 Cosplayers attending New York Comic Con earlier this month found themselves the victims of harrassment by a TV crew from the show Man Banter. The host, Mike Babchik, reportedly approached a number of cosplayers and asked inappropriate questions, creating a huge backlash online as convention attendees joined forces to fight against the behavior.

Blogger and steampunk enthusiast Diana M. Pho was one of the cosplayers to sound the alarm about the group wandering the convention on her Tumblr, where she shared her encounter with Babchik and his staff. The identity of the crew was confirmed when fellow cosplayer Bethany Maddock posted their photo on her Facebook page. 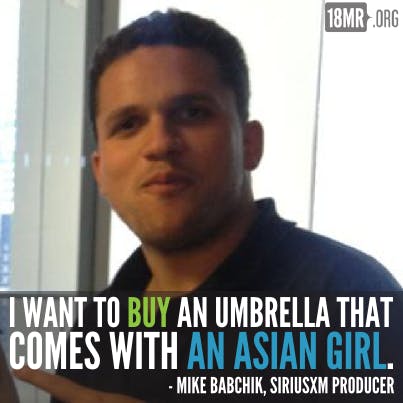 Now there is a petition by 18MillionRising calling for Babchik’s employer, Sirius XM Radio, to fire him for his behavior. 18MillionRising, a group promoting civic engagement of Asian and Pacific Islanders in the United States, is offering resources for people to call Sirius XM and voice their support for the firing.

At first there was confusion about who Babchik actually worked for, since a business card given to one of Pho’s friends by the crew identified Babchik as an associate producer for Sirius NFL Radio. He is actually a producer for Mad Dog Radio on Sirius XM.

Here’s @Babchik showing up for work! Either he wears this or he’s wearing Phillips’ jacket and holding his umbrella! pic.twitter.com/COH8VQ9hZ4

He mentioned his job at Man Banter and Sirius in his Twitter bio before deleting the information and making his account private after the backlash. His bio originally said: “On-Air bad guy for Evan & Phillips on Mad Dog Radio Sirius XM 86 and host of Man Banter on Bronx Net & MNN. Living proof that anyone can reproduce.”

Babchik isn’t the only one making changes to his online presence as a result of cosplayers speaking out. Man Banter has deleted its Facebook and Twitter pages, and made all its YouTube videos private.

While Man Banter and New York Comic Con have apologized for the incident, Sirius XM has yet to respond and online outrage has not lessened. 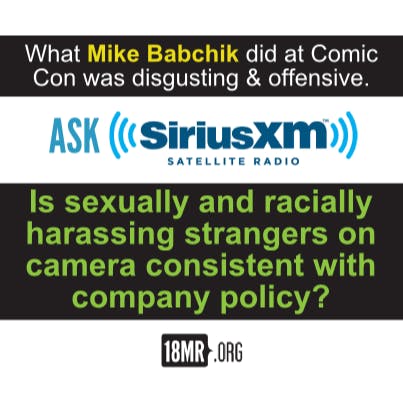 “It would be bad enough if Babchik was just a regular conference-goer behaving badly, but the fact that he presented himself as a SiriusXM employee is beyond the pale. No company—especially Sirius, which touts lineups of progressive musicians and media icons like Oprah Winfrey and Bruce Springsteen—should tolerate this kind of behavior from its staff,” the 18MillionRising petition states.

“We demand that SiriusXM take immediate action and fire Babchik. The minute Babchik used his Sirius credentials to allow him to harass people, he acted on behalf of the company. Firing him sends a powerful message that no one can act so horribly and still expect to have a job the next day.”

According to 18MillionRising, not only have they not received a response from Sirius XM but posts to the company’s Facebook page regarding the incident have apparently been hidden or deleted. 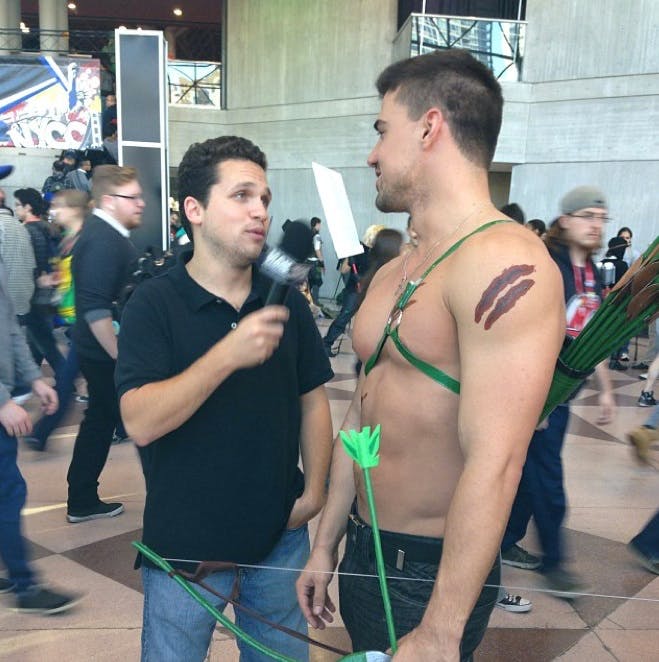 While Babchik and Man Banter have tried to hide much of their presence at this year’s New York Comic Con, images of Babchik interviewing convention attendees are still posted online through the company that acted as his crew for the show, New Face Media Productions, which stated on its Facebook page that it would be taping the show at comic-con. A few of the show’s past videos are still available for view on the company’s Facebook page as well.

The 18MillionRising petition has reached 76 percent of its signature goal.