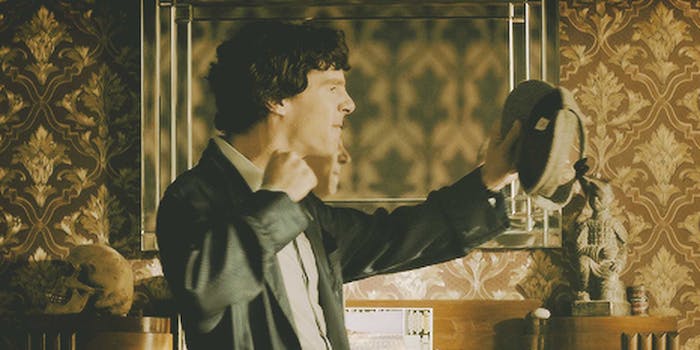 The preview screening sold out in minutes, leaving fans disappointed.

After two years of waiting, Sherlock fans are finally getting what they want: a third season. The first promotional image from the new series has been released (and is already a meme), and a preview screening of the first new episode was announced this week.

The only problem is, hardly anyone could get tickets to that screening.

The new episode, “The Empty Hearse,” sees Sherlock Holmes return from the dead and reunite with Watson. Organized by the British Film Institute, the preview screening sold out in minutes— even though tickets were only available to BFI members, and the event is not until Dec. 15. Some fans even went to the trouble of buying BFI memberships just so they could have first dibs, but most were still too late.

Our Sherlock preview has now sold out. We’ll be filming the Q&A & making it available for everyone on the #BFIPlayer https://t.co/EQLLUYHThH

On the bright side, the Q&A with the main cast and crew will be streamed online, but many fans are still feeling very disappointed by what they see as preferential treatment for BFI members. One even tweeted Sherlock creator Mark Gatiss to say she felt like she was being treated like a “second class citizen,” to which he replied, “It’s standard practice, not malice. Grow up.”

The first episode of the second season was also shown at a BFI screening in 2011, and Sherlock fandom did admittedly survive not being able to attend.

Of course, there’s also the problem of spoilers. Sherlock showrunner Steven Moffat is known for supporting ruthless spoiler-embargoes, but some information is bound to leak before the episode officially airs in 2014. Sherlock Holmes blogger alistaird221b writes, “Statistically, there is a significant chance that some of those viewing the show will feel a sense of power over the rest of us – I’ve seen something you’ve not seen.”

Some fans are even annoyed by the fact that the Q&A will be available online at all, because GIFs and quotes will surely be all over Tumblr in no time. “I am so angry,” writes Tumblr user johnlockedness. “This is going to contain spoilers for sure. Why would you even be interested in this without having seen the actual episode yet???”

The screening is intended to be a promotional event for crew members and the press, but to many fans it seems more like a movie premiere that is only available to a small elite. Still, they won’t have to wait for much longer. The episode is due to air on PBS on Jan. 19, with the as-yet unannounced BBC airdate presumably a few days beforehand. If those 400 lucky ticket-holders can remember to tag their spoilers for just one month, they can probably avoid any more backlash than they’re already getting.