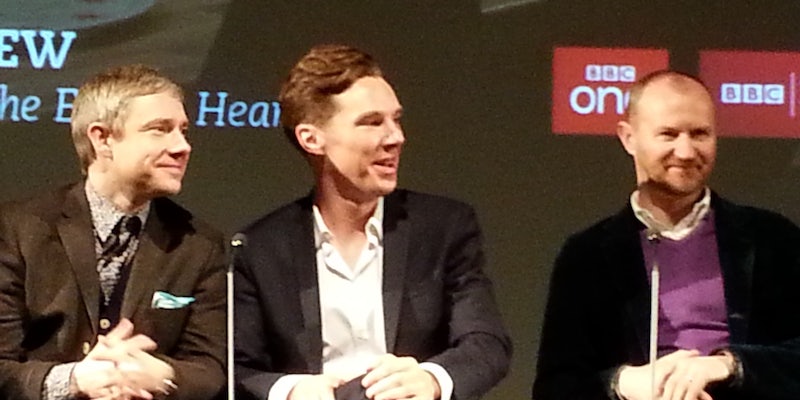 The ‘Sherlock’ preview screening was more than just controversy

There was also a new episode!

If you’ve ever attended a Q&A panel of any kind, you’ll be familiar with the feeling of dread when someone in the audience asks that question.

No matter what, there’s always that one awkward topic that nobody wants to tackle, but invariably, someone stands up and asks about it anyway. Unfortunately, at this weekend’s exclusive screening of the new Sherlock episode, that one awkward person was Caitlin Moran, the journalist moderating the Q&A with cast and crew.

Although the episode was received with open arms, fan reactions to the Q&A that followed have already overshadowed any expected discussions about plot spoilers. Instead of frantically googling for information about the episode itself, the most popular topic is why Moran decided to ask Benedict Cumberbatch and Martin Freeman to act out a scene from a fanfic centered on the Holmes/Watson romance that fans have dubbed Johnlock.

Actors in fandom-friendly shows like Sherlock usually have to put up with a certain amount of awkward mockery from late-night talk show hosts and newbie reporters. Pretty much the entire cast of Harry Potter had to grit their teeth and smile through various “funny” fanfic readings during their decade of promotional interviews, and Cumberbatch and Freeman have already had to live through their fair share of uncomfortable encounters with fandom’s Fourth Wall.

Still, this particular instance was especially bizarre because it was playing to precisely the wrong audience. Not to mention the reaction from the cast and crew themselves. From my seat towards the front of the auditorium, I could see Cumberbatch’s feet begin to twitch nervously as soon as that fanfic printout changed hands.

This wasn’t a room full of people who thought fanfiction was some kind of hilarious niche interest for Internet perverts. This was a preview screening for TV reviewers, celebrity guests, and Sherlock fans who probably read or write fanfic in their spare time. In other words, half the people in that audience had just become the butt of Moran’s joke, and the other half didn’t seem to find it very funny. Slash fanfic—which features male/male romances—probably does still hold some kind of shock value somewhere, but not in a room full of Sherlockians, a fan culture that was already submitting handwritten fanfics to Arthur Conan Doyle during the Victorian era.

The audience laughed, but that laughter turned nervous and awkward as soon as Moran brought out the fanfic printouts. It was a decidedly uncomfortable experience for everyone involved.

The tone of the screening was a little odd from the beginning, though. It had the feel of a relatively minor event that had become weirdly overblown thanks to the cult of Sherlock. Sure, there were a few famous people in the audience, but it was essentially just a press screening with a few extra seats left over for fans. Except, of course, there’s no such thing as “a few” when it comes to Sherlock fandom. Hundreds of people were waiting outside for a glimpse of Freeman or Cumberbatch, despite being told that it wasn’t a movie premiere or public event.

With the exception of Moran’s awkward fanfic questions, the Q&A was just a typically banal press conference, with controversy-prone showrunner Steven Moffat staying quiet while Freeman and Cumberbatch smiled and gave spoiler-free answers to the audience.

Thanks to all the discussion of Moran’s fandom faux pas, a lot less attention has been paid to the actual episode, which had a surprising amount to say about fan culture itself. Without going into too much spoilery detail (Moffat was typically emphatic with his anti-spoiler threats), I can say that The Empty Hearse spends a lot of time considering the concept of Sherlock Holmes as a public figure. A celebrity, even.

We may never know just how much of Sherlock’s onscreen fame is influenced by the show’s popularity in the real world, but you can’t help but wonder how much Moffat and Gatiss were inspired by their experiences with the fandom juggernaut that is Doctor Who. There are plenty of TV shows where you can see the writers’ real experiences bleed through into their work, but Sherlock is almost unique in that its writers are, by necessity, in constant contact with fandom. Right now, Gatiss and Moffat’s job includes going to press screenings where people force them to sit through stilted readings of erotic fanfic performed by their coworkers. It’s no wonder that their version of Mrs. Hudson is essentially an aging slash shipper.

Mark Gatiss, who wrote The Empty Hearse, cheerfully admitted to a kind of accidental collaboration with Sherlock fans. After two years of rampant speculation, he could hardly fail to be influenced by the many theories regarding Sherlock’s demise. I would never spoil you for what actually happens, but suffice it to say that the narrative of Sherlock’s return from the dead definitely owes a lot to some of those fan theories. Which is kind of fitting, since the original Sherlock Holmes only came back after years of public outcry from Conan Doyle’s readers.

As well as the subtler fandom influences in the show, there are a couple of times when you can see it onscreen in a far more literal sense. As Moran pointed out during the Q&A, there are a few seconds when “real” Sherlock fans actually appear in the background of shots — and not on purpose. When filming in some public London locations, it was simply impossible to keep the crowds at bay, and as a result, you can spot one or two fans lurking in the background.

Sherlock fandom is notoriously volatile, but a lot of that is generated by debates about racism or sexism in the show, offensive statements from Steven Moffat, or typical in-fandom shipping disputes. Caitlin Moran’s interference is a rare occasion where Sherlock fans actually seem united against an outside “enemy”, so I’ll be interested to see how they will react to this episode after it airs in January. If past experience is anything to go by, they’ll find something to argue about. But the mood at the preview screening was so utterly positive (before the Q&A began, anyway) that I’m inclined to hope the good will far outweigh the bad.