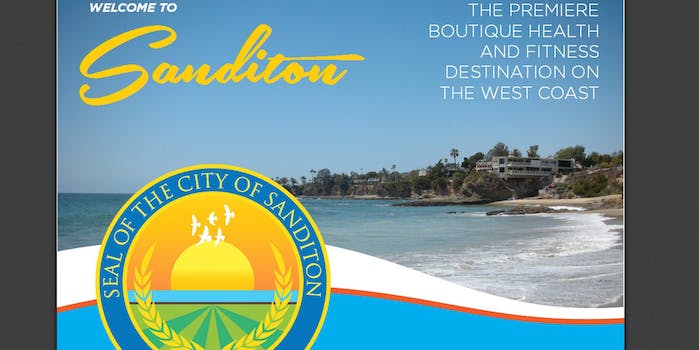 Fans of the new series from the creators of the Lizzie Bennet Diaries are wildly enthusiastic on Twitter.

Were she alive today, Jane Austen would be having a good laugh: Just like the fictional townspeople she wrote about in her unfinished novel Sanditon, fans of the new offering from the creators of The Lizzie Bennet Diaries have rushed enthusiastically in over their heads.

In fact, fans have been so enthusiastic about the LBD’s adaptation of Sanditon that Twitter shut down their accounts for tweeting and following each other too rapidly, mistaking them for spambots.

Sanditon is about a fictional, satirized resort town on the coast of England whose residents are trying to establish it as a hot spot for tourism, even if that means exaggerating its many attributes. The newly launched YouTube version of the story moves the wannabe tourist destination to coastal California. But after the show’s creators invited fledgling Sanditon fans to participate in the storyline by creating their own Twitter accounts as residents of Sanditon, Twitter stepped in, assuming that most of the accounts were spammers instead of eager fandom roleplayers.

After having its Twitter account suspended multiple times for following so many of the roleplay accounts for the fictional town of Sanditon, the Sanditon Sun, which has been one of the most active hubs for the Sanditon role-playing (RP) community, reported on Tumblr that it had attempted, unsuccessfully so far, to contact Twitter about the account suspensions. (Currently its Twitter account is back online.)

So many Sanditon residents and businesses have joined social media for the Domino beta test that Twitter is apparently mistaking some of them for automated spam accounts.

A number of Twitter accounts, including the Sanditon Sun’s, have been temporarily or even permanently suspended in the last ten days while people tweet links from their Tumblr pages or follow other Sanditon accounts.

The microblogging site’s list of rules says your account can be suspended if you follow large amounts of users in a short time period, post multiple unrelated topics to a hashtag, send large numbers of duplicate @replies or mentions, add a large number of unrelated users to lists, or if your updates consist mainly of links – all of which might apply to people tweeting to #sanditon or @SanditonCA.

To reiterate, we don’t yet know why accounts are suspended. But residents are not doing anything wrong; being suspended is not your fault.

The Sanditon community has become a thriving, bustling place in the few days since Pemberley Digital (an offshoot of the Lizzie Bennet-verse) uploaded the first of its Sanditon vids. Hospitals, farmers’ markets, newspapers, government offices, lighthouses, even Sanditon book clubs are cropping up, along with a wealth of roleplay boutique stores. The Sanditon coffee shop garnered over 800 followers after one of its tweets went viral on Monday:

We just received a DM that just said “Wanna fuck?” and then a link. We cannot fuck anybody. We are a coffee shop.

There’s even a tourism brochure.

As far as roleplays go, this one appears to be thriving. Judging by follower activity, the unsuspended Twitter roleplay accounts for Sanditon number in the hundreds, with many more on Tumblr. The town dynamic appears to have unfolded almost without any help from the official Sanditon creators, who have so far only released two actual episodes this week. Already, faux tension between the traditionalists and advocates for “New Sanditon” is paying off in a number of creative ways.

Why, it’s almost as if Sanditon were a clever satire of real small-town life. This is one group project that might have incredibly interesting results.

As long as they can manage to stay online.