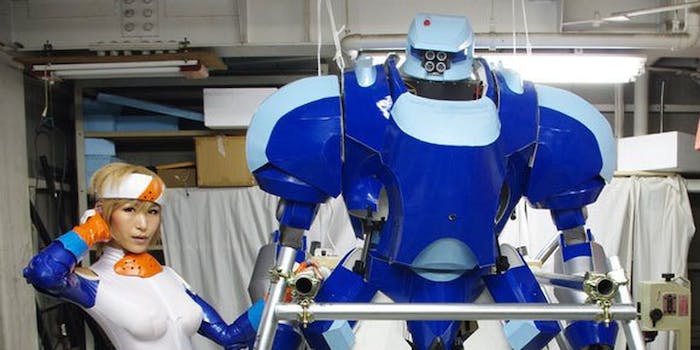 Live out your biggest nerd dream in this working mecha suit

It doesn't come with any weapons. But it'll make you the most stylish mecha out there.

Looks matter—at least when it comes to massive, robotic exoskeletons straight from a geek’s heart. In 2013, Sagawa Electronics revealed the $125,000 Powered Jacket MK3, an impressive contraption that can detect and then telegraph arm and head movements to its metallic parts. The company even released a funny promotional video for the suit, replete with references to the classic Japanese anime Ghost in the Shell.

But while an engineering masterpiece, it wasn’t without its problems. The powered Jacket MK3 wasn’t exactly pretty. Enter Japanese manufacturer Dai-Nihon Giken. The company, which makes a wide range of anime-related merchandise, has produced armor that can be attached to the MK3, which is inspired by the Landmate power suits from Shirow Masamune’s sci-fi saga Appleseed.

Made from a type of urethane commonly seen in model kits, the armor is, sadly, only decorative in nature, as Rocket24 reports. It does not, for instance, come loaded with any weaponry. But that doesn’t stop it from being the most stylish exoskeleton on the market.