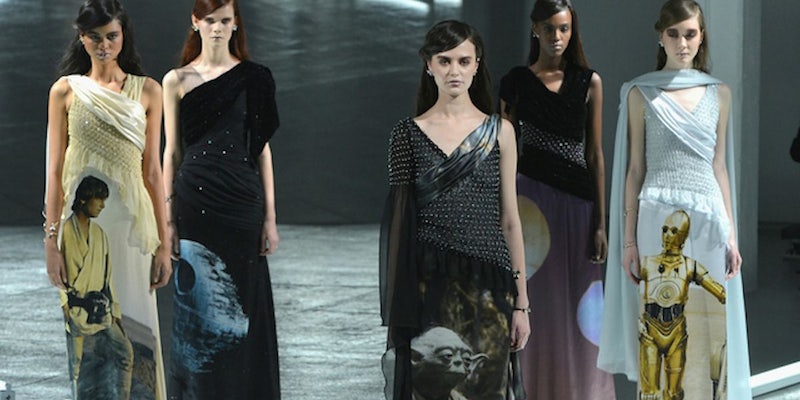 These dresses should come with lightsabers.

If you felt a disturbance in the Force yesterday, it’s probably because science fiction and fashion were colliding on the runway at New York Fashion Week.

Clothing brand Rodarte ended their Fall/Winter 2014 show Tuesday with a collection of Star Wars character print dresses. The whole show seemed to be a dedication to designers Kate and Laura Mulleavy’s ‘80s childhood.

“We couldn’t have done a collection like this and not included Star Wars,” Kate said. “Those films represent for us a time when anything was possible.”

Fans and industry professionals weighed in on social media to share what they thought of the dresses. Overall the response was positive and many seemed happy to see geek chic make an appearance. Voice actress and Her Universe founder Ashley Eckstein shared the news on Facebook writing, “This is going to be a BIG year for Fangirl Fashion!” Fashion blogger Mirnah wrote on Tumblr that “the Rodarte girls are never ones to play it safe, but this is pretty cool, even for them.”

Twitter was more of a mix of reactions, with some loving the look and others a little unsure about Star Wars appearing during fashion week.

I’m all for Star Wars, but this is taking it to another level #rodarte… I don’t know about this. #NYFW pic.twitter.com/vBmMk4stBa

Media outlets had fun with it too during an otherwise lackluster fashion week. Headlines took advantage of every franchise reference and Yahoo! Shine shared a GIF on Tumblr writing, “We hope they have light saber accessories to match.”

While we’ve occasionally seen Star Wars inspire shows before, it’s a rare occurrence. Considering there are a good number of fans who feel the fashion industry has ignored fandom for far too long, inspiring the rise of online retailers like Gold Bubble Clothing to fill the gap, it’s a welcome sight to see a brand once again take a chance with such a theme on the runway.